Graham Hawkes Exploring the High Seas From The Bottom 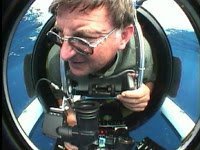 Graham Hawkes of Hawkes Ocean Technologies has built over 60 manned submersibles over his four-decade career. His newest craft is called the DeepFlight Challenger for Richard Branson’s Virgin Oceanic.

His inventions look more like airplanes than submarines. He explains, “Conventional submarines always need to be launched and recovered by a mother ship. A much better way is to go flying underwater (italics added).”

In order to enable the ability to move horizontally in the water, his submarines must “look, smell, fly like an aircraft.” His goal is to build submarines that are less than 10,000 pounds and can be docked and reduced from a private yacht.

Why is his vision important? Graham explains, “As soon as we start to run out of strategic minerals, there will be a stampede straight into the oceans for resources. We’re going to exploit the oceans on a massive scale within our lifetimes. I’m talking about physical minerals and food.”

Open water swimmers can appreciate Graham’s perspective when he is underwater. “there is something about being underwater that induces a near-trancelike state. It’s unbelievable. People come up with a big, slow relaxed smile on their face and tell you (being in a submersible) was the most profound thing they’ve ever done. It’s like being home.”