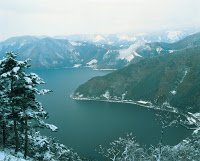 JAPAN. Lake Biwa is the largest lake in Japan with a growing number of open water swimming events being held on its shores.

From the Ironman Japan where the storied event was held for many years in the 1980s and 1990s to the first solo (42K) marathon swim across the lake accomplished in 1989, the lake is the source of drinking water for 15 million people in the area and has appeared frequently in Japanese literature, particularly in poetry and in historical accounts of battles.

Lake Biwa is just north of the ancient Japanese capital of Kyoto. Located in Shiga Prefecture, its Eight Views of Omi (近江八景) are well-known ukiyo-e pictures drawn by Hiroshige.