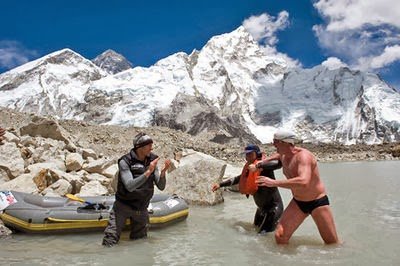 While many great moves in open water swimming history requires speed, strength and stamina, Lewis Pugh went in the opposite direction.

He swam slowly and with humility.

His move ensured his very survival on the shores of Lake Pumori on the Khumbu Glacier on Mount Everest at 5,300m altitude.

His move was a radical, tactical shift away from everything he knew.

Pugh prepared to swim his planned 1 km swim across the glacier lake as he normally does: listen to music and swim aggressively. But this time, his strategy did not work.

“It was controlled aggression. I hurled myself in that water. I swam as quickly as I could for the first 100 meters and then I realized very very quickly that I had a huge problem on my hands. I could barely breathe. I was gasping for air. I then began to choke and that quickly led to my vomiting in the water.

His crew took him for a debriefing and discussed what had went on. His team advised him, “Lewis, you need to have a radical, tactical shift if you want to do this swim. Every single thing that you learned in the past 23 years of swimming, you must forget. Every single thing that you learned when you were serving in the British army, you must put aside.”

They advised him to walk up the mountain in two days and execute that radical, tactical shift. “Instead of swimming fast, swim as slowly as possible. Instead of swimming crawl, swim breaststroke. And remember never ever swim with aggression, this is a time to swim with real humility.”

He followed their advice: swam slowly, swam breaststroke and successfully and safely completed an unprecedented glacier lake swim near the summit of Mount Everest.