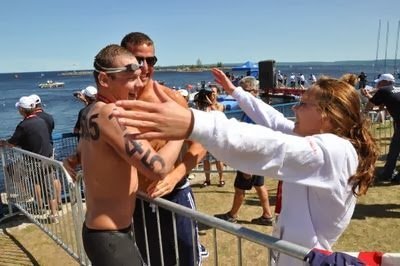 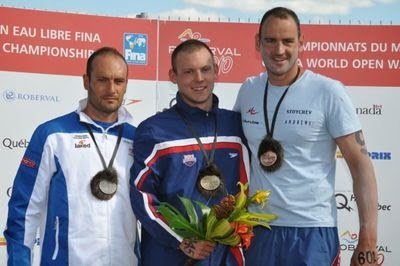 The professional marathon swimming world has seen innumerable great races throughout its history. Some races have been won by guts, some won by strategy, some by navigational decisions, and others by physical talent or mental focus.

But when two athletes are evenly matched, their moves and countermoves are a joy to observe.

One of the best combination of moves and countermoves in the 21st century was the mano-a-mano battle against the reigning world 25 km champion Valerio Cleri of Italy and American Alex Meyer in Québec‘s lac St-Jean.

The two men were pitted against each other at the World Open Water Swimming Championships in the most famed professional marathon swimming venue in the world. At a time of typically unpredictable cool water temperatures, the event was the last race in the 2010 Championships that had seen all kinds of upsets and unexpected medalists on the podium.

Considering the 16C water, the pace was relatively slow for the first 15 km while Cleri and Meyer darted in and out of position among the leaders. Neither competitor was interested in leading for anytime other than the last stroke. Both were content to sit back and let their rivals take the reins and lead the men’s field.

As the race continued past the 15 km mark, the men’s lead pack whittled down due to attrition and pacing around the 2.5 km loop course on the western shores of lac St-Jean. But Cleri and Meyer were both like lanolin under the armpits; they just would not go away. No one in the field was about to drop these two fierce competitors.

By the last loop, it was clear that Cleri and Meyer were both going to find their place on the podium, but the odds clearly favored the Italian. An American man had not won a world 25 km championship since 1991 while Cleri was one of the most experienced open water swimmers on the Planet. With one last feeding stop, the two knew exactly what they had left in their tanks. As they eyed each other, it was like two heavyweight boxers gearing up for the final round. Both took their feeds as they figuratively met in the center of the ring.

Then Cleri bolted in the lead with Meyer in the chase position. Cleri went down the final straightaway to the left and Meyer clung to the right. Then they shifted positions like kindergarteners played a round of musical chairs as they quickly opened up a gap on third-place Petar Stoychev. Around the last turn buoy where the men made a 90° left-shoulder turn, it was the veteran Cleri with a quarter-body-length lead.

But Meyer was always considered a fast closer and Cleri could feel and see him off to his left. After 5 hours, the knowledgeable spectators that filled the stands were enjoying every stroke. The official’s boat, head referee’s boat, and media boats sandwiched the two warriors who were intent to use every tool in their arsenal. Even with the lead and less than 250 meters to the finish pad, Cleri made a tactical decision to veer Meyer off the straight-line tangent. Both men were sprinting hard with their trademark 6-beat kick. Cleri was just slightly in the lead with Meyer hand entry between Cleri’s mid-torso and shoulders.

As Cleri started to veer slightly left, Meyer had no choice but to either initiate contact or swim parallel to the Italian. With the head referee Jorge Delgado of Ecuador standing up on the nearby official’s boat and intently staring at the moves of the two men, Meyer was not about to get a red flag so close to the finish – as he had a year earlier at the 2009 World Championships in Rome where Cleri had claimed gold.

So Cleri veered left and so swam Meyer out of necessity. At first, the angle was only slight but as the men got closer to the finish, the angle became more acute. As they stroked together in parallel, the men went off 10° from the rhumb line to the finish. Pushing Meyer just a shade to the left meant Cleri would have the shortest and closest distance to the finish once he shifted back towards the rhumb line. So he decided to veer even greater, 20°…then 30°…then the men made the officials boat swing wide as they were nearly 45° off the rhumb line. Cleri had literally pushed Meyer off-course, but had done so gradually over the course of 150 meters. Stroke-by-stroke, the veering was performed subtly but in aggregate the men had clearly swum more than 30-40 meters farther than necessary.

Still with less than 100 meters to go, it was a classic race-to-the-finish that the professional marathon swimmers are known for. A silver-medal performance was not bad for the young American graduate from Harvard University. But Meyer was not about to let Cleri win so easily.

In the blink of an eye, Meyer shifted quickly to the right crossing over the calves of the surprised Italian. But he didn’t take a beeline to the finish as that might have resulted in a red-card-worthy act of physicality. Meyer swung wide, very wide, of his rival. As soon as Cleri felt Meyer shift the balance of power on him, he also bolted right.

Again both men started to swim parallel to one another, but not immediately towards the finish. Meyer was swimming wide, hopefully to “cut the corner” around the Italian’s right side.

Incredibly, the last 250 meters of the course was turning into a 350m zigzagging maze of moves and countermoves. The crowd loved it and the officials boats quickly followed suit, following the swimmers.

First left and now right, Meyer kept on charging forward but not directly towards the finish pad. Cleri and Meyer were not equidistant from the finish, but neither man was swimming straight for it. Angled right, Meyer had the momentum and finally was able to break through and cut the corner around Cleri.

Once Meyer had the edge, the two men bolted straight for the finish. While just moments before, Cleri had been in the driver’s seat, Meyer was now the lead horse and the victory would be his barring any last-second stumble over the last 50 meters.

“I know that Cleri wasn’t taking a straight path and he was trying to cut me off when I tired to swim on a course to the finish,” recalls Meyer. “I felt that I am a better sprinter, and I knew that if we were even or if we were stopped dead in the water with 50 metres to go, I was sure I could get to the touch pad first.”

As his Italian teammates were shocked with the rapid turn of events, so too were Meyer’s American teammates whose whistles and cheers increased in intensity. Meyer was able to hold off Cleri as he won by a stroke and 1.1 seconds in a time of 5:32.39.3.