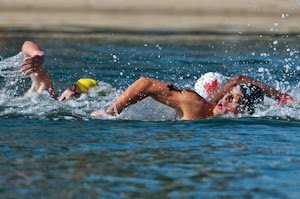 While many great moves in open water swimming history requires speed, strength and stamina, Fran Crippen combined those talents with compassion and friendship at the 10 km marathon swim at the 2010 Pan Pacific Swimming Championships in Marine Stadium in Long Beach, California.

Crippen had just won a dramatic USA Swimming National Open Water Swimming Championship 10 km title in the same venue a few months before over Chip Peterson, Andrew Gemmell and Alex Meyer (see video below). Crippen was the indisputable role model and emotional leader not only among this elite quartet of world champions and Olympians, but of the entire American open water swimming community.

It was a position that came naturally and easily to Crippen. On the shores of Marine Stadium in Long Beach, he knew his buddy and fellow competitor Meyer was feeling bad – and looking worse. He just wasn’t his same ol’ self. “I had some sort of salmonella poisoning or something,” recalls Meyer. Looking pale and weak, Meyer still swam out to the start and lined up with the international stars from Australia, Canada, Ecuador, Brazil and the USA.

“It was clear that Alex was not his normal self and I was surprised that he even put on his cap and goggles,” said race director Steven Munatones. “He should have been in bed, not in the open water.”

Crippen knew that too. But he balanced his spirit of fierce competitiveness with his concern with his teammate.

“As the pack started to get strung out a little before half, Fran started to pick up his head and look around,” remembered Munatones who was on the referee’s boat alongside the lead pack. “It was clear that he was looking for something or someone.” It turned out that he was looking for Meyer who was clearly struggling. “He slowed up, cut across the pack, and made it a specific point to swim up to his friend. It appeared there were not only words spoken, but there was an obvious bond and concern that was shared through their goggles without words being spoken. It was like Fran was saying, “C’mon buddy. Hang in there. I am with you, just draft alongside.'”

The move was touching and dramatic. It was totally uncalled for and completely unselfish.

Just a quick move and quick check on a fellow athlete showed the officials and fans exactly what made Crippen the man and role model that he was. Crippen clearly put his own goals on the back burner and showed compassion during an international competition.

Meyer ended up pulling out of the 10 km swim, but Crippen came back and just barely lost the gold to another American world championr. Crippen’s sister Teresa remembered watching her brother turn back during the race with disbelief, but she knew exactly what he was all about. “Alex was like a brother at that point.”

“He was my friend and teammate,” said Meyer. “Fran touched so many people in so many different ways.” That is quite clear in the Marine Stadium in August 2010.