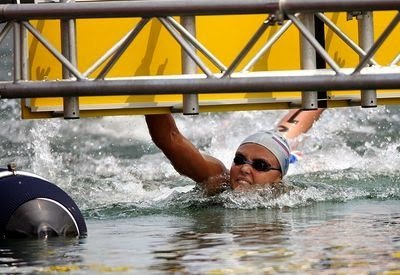 The Ilchenko is one of the few terms in the open water swimming world that is named specifically after an individual. And what an individual that swimmer was.

Until the end. The very end.

Whether the race were 5,000 meters or 10,000 meters, it was not in Ilchenko’s interest to be in the lead except when it counted. She just knew how to kick into a different gear when it mattered most. The Queen Bee of the last decade among professional marathon swimmers, Ilchenko knew when and how to shift gears.

The competitive ambiance among the women was never more evident as during the 2008 Olympic 10K Marathon Swim in the Shunyi Olympic Rowing-Canoeing Park at the Beijing Olympic Games. Characteristically, Ilchenko trailed right behind the British dual leaders of Keri-Anne Payne and Cassandra Patten who lead the field for 9,900 meters of the 10,000. But things did not go completely to plan for Ilchenko. Early in the race, American Chloe Sutton moved into her usual trailing position and later in the race, she completely missed her feeding and had to hydrate on guts and rely on her closing speed.

As the lead women came around the last turn buoy, Ilchenko was following in her familiar position. With less than 100 meters to go, Ilchenko moved up alongside the right side of her two British opponents. She picked the ideal straight-line tangent to the finish pontoon. As her competitors were gasping at the end of the race, Ilchenko seemed to speed up with an even stronger 6-beat kick and faster arm tempo. She culminated her Olympic victory with a body-length lead to spare.