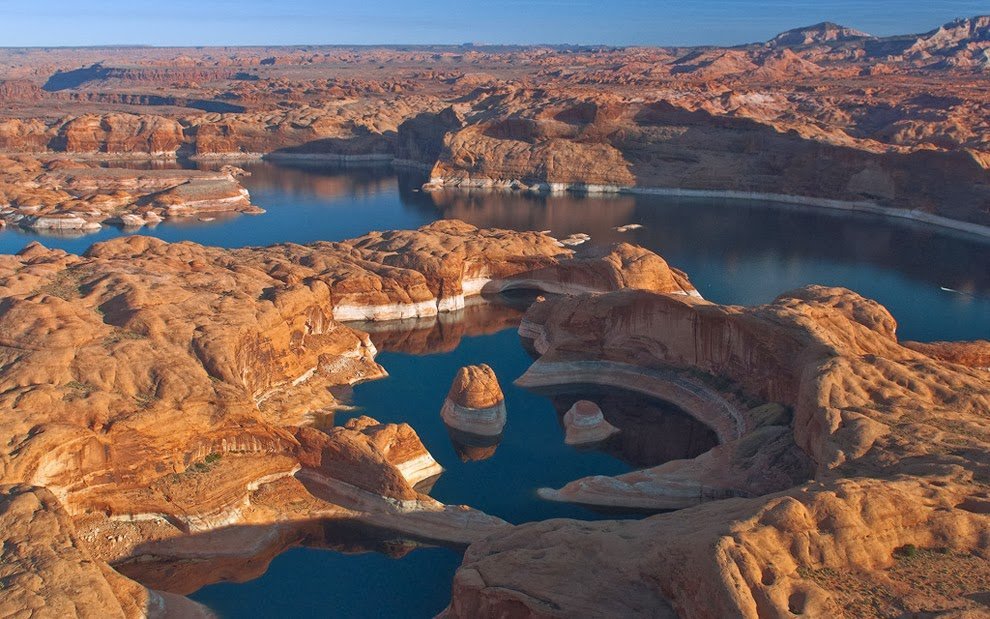 The following are 10 wonderfully interesting places to do an open water swim, some fanciful, some real, all unique:

1. Willy Wonka Factory’s Chocolate River (see videos below): The chocolate river was created on a Hollywood soundstage for the 1971 movie. It was two feet deep and consisted of 150,000 gallons of water mixed with chocolate and cream. It was also shown in the 2005 version Charlie and the Chocolate Factory.

2. 10 Beach: Manzanillo in Mexico is a popular beach and resort on the Mexican Riviera which is site of a FINA Open Water Swimming Grand Prix race and scene from the movie 10 with Bo Derek and Dudley Moore.

3. Planet Earth AD 3978: The Colorado River along Glen Canyon (photo shown above; see video below) was the opening scene in the 1968 movie Planet of the Apes, a lonely, desolate location where American astronauts landed in the year AD 3978.

4. Planet Earth AD 3978: The cove at Westward Beach between Zuma Beach and Point Dume in Malibu, California (see video below) was the final scene of the 1968 movie Planet of the Apes where the Statue of Liberty had washed ashore.

7. West Sands (shown below): The 2-mile long beach is adjacent to the famous St Andrews Links golf course in Scotland where the opening scene of the Chariots of Fire was filmed.

8. Ocho Rios: The tropical beach in Jamaica with conch shells was made famous by Ursula Andress in the 1962 James Bond movie Dr. No.

9. Atlantis: The fictional island could be anywhere from the Irish Sea to the Canary Islands.

10. Monuriki: One of the Mamanuca Islands in Fiji in a subgroup of the Mamanuca archipelago was the site of the 2000 movie Cast Away where Tom Hanks was stranded on the fictional uninhibited island.