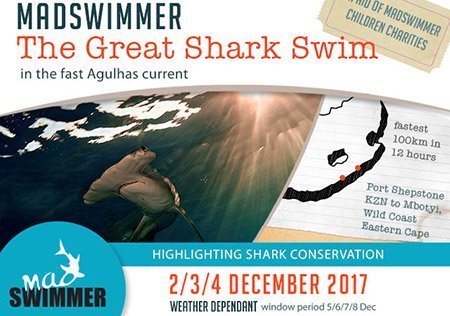 The Great Shark Swim along the KwaZulu Natal Coast in South Africa is highly popular as it quickly filled its maximum number of swimmers.

Nicolene Steynberg reported that every swimmers has been filled in an attempt to complete the fastest 100 km ocean swim within 12-13 hours by swimming along the KwaZulu Natal Coast in South Africa in the fast Agulhas Current.

We have a Plan B starting point in the event of a Natal Pulse – rare reverse current where the course will be from Park Rynie to Port Edward.

As all other MAD swims, this swim will again raise funds for the 10 registered children’s charities supported by Madswimmer. Madswimmer has raised over R7,000,000 over the past 8 years.

The window to start will be between December 2nd – 8th

“The swim will be during daylight hours. The swimmers will swim in a group at all times with a maximum of two groups, fast and slow. The pace of the groups will adjust to slowest member in the group. Support vessels will be alongside at all times with the groups. Feed breaks will occur every 45 minutes. Just before each feed break, the slow group will be picked up and dropped off at fast group so there is a re-grouping every 45 minutes. Two kayakers will be with the lead group to help with guidance. Paddlers will within 3 meters at all times from the front pack. There will be a total support staff of 15 individuals including a crew of 6 and 3 doctors on the main boat.”

Dr. Sean Gottschalk will oversee two ambulance and nursing staff. “We’ll need 3 medics total and a sea rescue chopper on standby to airlift a swimmer as we are quite isolated offshore.”