In an online poll conducted by The Daily News of Open Water Swimming, 208 experienced swimmers from around the world expressed their greatest fears of the open water.

Despite the hoards who are entering the open bodies of water around the world, fear still plays a factor in the minds of many.

Here is what scares some people:

You gotta respect those athletes who said, “Nothing.” Shelley Taylor-Smith, seven-time world professional champion and fearless solo marathon swimming adventurer, was one of those intrepid swimmer. “Absolutely nothing I fear,” which was understandable because she swam frequently in the company of sharks and was the first person to swim in a bikini in world swimming championship event. Why? 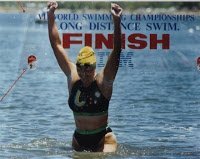 “I wore this bikini suit because of the jellyfish that were everywhere [in Perth’s Swan River]. I wanted to be able to let them out [of my suit]…or get them out with easy access and not disturb my mental focus and mindset which they are renowned for doing,” recalled Shelley with a smile.

“I won the race and gritted my teeth as I got stung.”