Greta Andersen Looks Back On Her Career 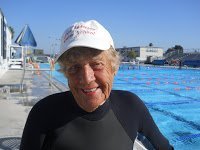 Greta Andersen was interviewed by Open Water Source today where she gave a lengthy, insightful recollection of her incredible career and life. She spoke of her incredible experiences both in and out of the water and her legacy that includes winning the Olympic gold medal in the 100-meter freestyle and being the first person to swim a two-way crossing of a major channel.

“I started in a shark cage, but it was getting me sick. So I told my crew that I will swim outside the cage. Anyway, sharks are MANeaters,” laughed Greta of her early attempt of the Molokai Channel. “I was only one mile from the finish of my swim between Molokai and Oahu. I was circled by the sharks. I didn’t want to get out, but everyone was worried about me. I never wanted to get out.”

She rarely faced failure as she always prepared herself for success through a combination of self-confidence and hard work. “I used to train 10 miles every day in Long Beach [California] in the ocean. Without goggles. That is what we did. But it sure helped when they made goggles,” again with an infectious laugh and wide smile.

“I remember another time when Ted Erikson wanted to test my blood. He was a physicist and a fellow swimmer. He wanted to know why I swam so fast.” Watching old videos of Greta swim, it was clear that her powerful, high-paced stroke tempo, propelled by a constant six-beat kick and streamlined body position, was one huge reason for her success.

“I remember one time up in lac St-Jean when there was some problem with my entry. They were not going to allow me to swim. But all the men [swimmers] said they would not swim if I was not allowed to swim.” An incredible boycott threat since Greta beat all the best men of her era at one point or another. “We swam in South America in rivers, in Capri-Napoli [Italy], in the Salton Sea [California], Canada and I swam throughout Europe. It was a great life. I have had a great life.”

Without a doubt, she most certainly has.