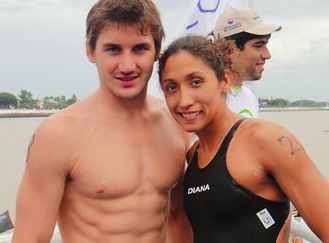 13 participants will compete on November 25th in the qualification race for the 44th edition of the 57 km Maratón Acuática Internacional Santa Fe – Coronda in Argentina that will be held on February 4th 2018.

The 13 aspirants (6 women and 7 men) must complete the Selectivo qualification course in 4 hours 40 minutes – and they will be competing with four special guest swimmers.

Bértola explains his marathon swimming perspective. “Sometimes I wonder why I do it if I suffer so much. Because it is not normal, it is not human. But when it comes to touching the plate after six hours of swimming, it’s very rewarding.”

The World Open Water Swimming Man of the Year nominees include the following individuals:

Bértola’s nomination reads, “Guillermo Bertola looks like an athlete with a hardened body and steely gaze. While he has been competing on the professional marathon swimming circuits for years, he has never risen to the top…until this year. The 27-year-old puts his mind in the right spot and aggressively attacks his training and professional marathon races around the world. This year, he won the overall title for the first time in his career, tying with Evgenij Pop Acev in the closest battle in FINA history. He won the 32 km Traversée international du lac St-Jean in Canada and finished 3rd in the 16 km Maratona del Golfo Capri-Napoli in Italy and the 33 km Ohrid Lake Swimming Marathon in Macedonia. He also competed in the FINA 10K World Cup circuit from Argentina to the UAE and competed in the 5 km team, 10 km and 25 km races at the 2017 FINA World Championships.”

He not only represents Argentina extraordinarily well as a personable, seriously-minded ambassador on the international swimming scene, but he also serves as an inspiration among young Argentine swimmers.

To register and vote on the WOWSA Awards and the 2017 World Open Water Swimming Man of the Year, visit here.