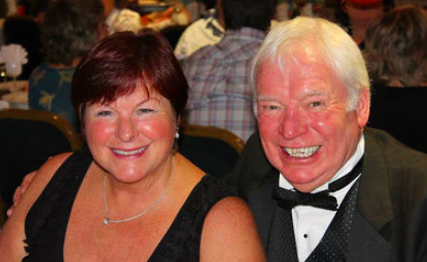 While his wife’s two-way crossing of the English Channel was recently included in the Guinness World Records, Charlie Gravett has also been included in the same publication.

So the husband-and-wife pair are unique in the history of the open water swimming world.

Both open water swimming specialists and veterans are inductees in the International Marathon Swimming Hall of Fame and holders of world records included in the Guinness World Records.

Sally Minty-Gravett MBE was included for her 36 hour 26 minute two-way crossing as the oldest scuccessful swimmer in history and was inducted in the International Marathon Swimming Hall of Fame as an Honour Swimmer in the Class of 2005.

Charlie was inducted in the International Marathon Swimming Hall of Fame in the Class of 2016 and was included in the Guinness World Records for his participation in an unprecedented six-man relay completed in 1971 for a 72-mile (115.87 km) relay from Turkey to Cyprus. “Back in 1971, I was part of a relay squad from RAF Akrotiri in Cyprus who swam into the 1972 issue (on page 296) with an entry which simply stated, ‘Turkey to Cyprus: A team of RAF (Royal Air Force) swimmers covered the 72 miles (115.87 km) from southern Turkey (Anima Bernie) to Cyprus (Kyrinia) in 2 1/2 days [actually 33 hours].

We had trained by swimming many, many solo trips between Akrotiri to Limmasol (6+ miles) plus many similar swims around Cyprus. One memorable trip was brought to a sudden halt when the bloke I was swimming with swam into an expired donkey which had escaped from a local abattoir. It’s gums were drawn back in a hideous grin. We left it where was and swum on