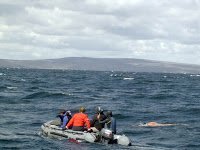 After his illustrious professional marathon swimming career, International Marathon Swimming Hall of Fame Honour Swimmer Gustavo Oriozabala from Argentina continued to swim and challenge himself as a solo swimmer.

In February 2006, Gustavo became the first person to swim between islands in the Falkland Islands, known as the Malvinas in Spanish.

He swam 8K in 90 minutes between Gran Malvina and isla Soledad – the first time anyone had swum between any of the 778 islands in the archipelago in the South Atlantic Ocean, located about 290 miles (460K) from the coast of mainland South America.

In the midst of the political differences between the UK and Argentina, Gustavo negotiated for years to arrange the swim that happened 24 years after Argentina and the UK fought over the islands. It took him 90 minutes to swim across between Saint Mont and puerto San Carlos.

“I knew it was going to be the most demanding test [of my career],” recalled Gustavo. “Two times, I was on the verge of quitting because of the intense cold of the water (3-5C). The winds and strong swells were challenging as I was going hypothermic. I was slowing down, but I believe the emotion [about the war] kept me going.”