Guy Cohen Swimming For The Past And Future 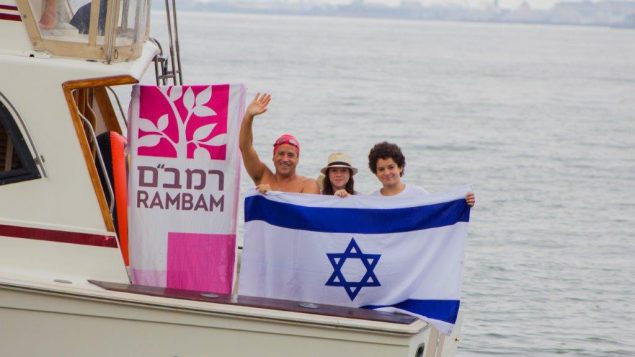 Photo of Guy Cohen and his children Noa and Matan, courtesy of Judah S. Harris.

When David Barra and Rondi Davies started to organize New York Open Water events, they had a vision that was soon realized.

Later joined by Alex Arévalo, the trio started to attract many accomplished endurance athletes to the waterways of New York.

While the New York Open Water events include the 8 Bridges Hudson River Swim, 40 Bridges – Double Manhattan Island Swim, 2 Bridges Swim, Governors Island Swim, and Spuyten Duyvil 10K, it is the 20 Bridges race, a 45.8 km circumnavigation course around Manhattan Island that has long captured the attention of marathon swimmers since 1915.

The July 22nd and July 23rd editions of 20 Bridges were events that showcased a number of athletes with inspirational backgrounds.

Another 22-year-old, Eliza Cummings from Colorado was coming off of a successful 40.4-mile (65 km) two-way all-female crossing of the Catalina Channel in 18 hours 4 minutes. 47-year-old Susan Knight from Maine had crossed the English Channel last year in a blazing fast 9 hours 26 minutes. 43-year-old Julie Isbill has co-founded iSwimToo and the Bold and Beautiful Swim Squad Manly.

40-year-old Stephanie Hopson completed her second leg of the Triple Crown of Open Water Swimming after her widely-broadcast 24-hour crossing of the English Channel in 2016. 67-year-old Lester Mangold completed his first Manhattan Island circumnavigation after completing 4 Strait of Gibraltar crossings in his 60’s.

52-year-old Polish swimmer and mountaineer Boguslaw Ogrodnik has not only completed the Seven Summits, but is also on his way towards the Oceans Seven. And 52-year-old Guy Cohen from Israel was swimming to raise money for research of Sudden Cardiac Death at the the Rambam Medical Center in Haifa, Israel.

His 6-year-old daughter Netta had passed away from Sudden Cardiac Death in school. “She just dropped on the floor by her desk. Her heart just stopped beating. There’s no explanation.”

Cohen raised more than US$25,000 as he continues to deal with his daughter’s passing. “That keeps me going. I’m sure she’d be proud and happy.”

* In 2011, Oliver Wilkinson set the overall record around Manhattan Island in 5 hours 44 seconds 2 seconds at the age of 36. Rondi Davies currently holds the women’s record in 5 hours 44 minutes 47 seconds.