H2O Unity In The Open Water And On Land 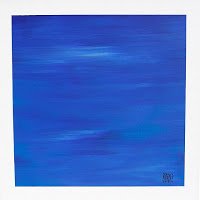 “I created the painting to help raise funds and awareness for all organizations affiliated with the non-stop three-day six-person distance swimming record attempt,” said contemporary artist Craig who donates 100% of the proceeds to the Wounded Warrior Project in the United States and Por Ellas in Mexico.

Craig, an open water swimmer himself, created the original painting that was directly inspired by the colors he sees when he swims in open water. “I specifically wanted to convey the rich tones we see when training in the water. This painting is a blend of the deep blues of the Pacific Ocean, the Sea of Cortez and Lake Powell.”

The featured acrylic painting is 24″ x 24″ and set on canvas with white space around it, allowing it to be hung without framing. “Because my works are contemporary abstract and feature bold color, I prefer them in this manner, uncluttered and without framing so that the work allows the viewer to ‘get lost’ in the painting — to impart meaning to each brushstroke.”

To submit a bid, go to the event website. Photo of H2O Unity by Ian Sitren.