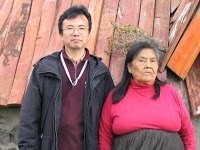 Cristina Zárraga and Jacqueline Windh will release the English version of a fascinating book called Hai Kur Mamashu Shis (Quiero contarte un cuento in Spanish or I want to tell you a story).

This 80-page paperback book was originally written by Cristina Calderón (shown on left) in the endangered Yahgan language.

The Yahgan are the southernmost indigenous people in the world. Their territory comprised of the canals and fjords in southern Patagonia from Tierra del Fuego to Cape Horn.

The women were known to swim in the incredibly frigid waters of this part of the water – diving in the ice water to catch shellfish and fish located in the thick kelp beds that thrive in the cold waters around the tip of South America – while the men stayed dry in the boats.

Calderón, the last pure-blooded tribe member, described the stories she heard from their elders as a child. She told her grand-daughter Cristina Zárraga in Spanish and Jacqueline has translated those tales into English.