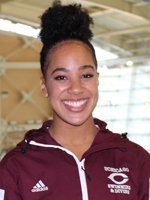 After the Caribbean nation’s governing body of swimming and life saving was approved in 2013 to 2014 to become a member of FINA (Fédération Internationale de Natation) and the International Life Saving Federation (Fédération internationale de sauvetage), Dr. Mervilus Dr. Mendelssohn Maurice have continued to step up Haiti’s efforts to not only get his fellow countrymen and women water-safe, but also to become competitive on the world stage.

Naomy Grand’Pierre has certainly help Haiti progress to the next level.

The accomplished student-athlete from the University of Chicago officially qualified for the 2016 Rio Olympic Games, the first Olympic female swimmer from Haiti to do so.

Grand’Pierre qualified under FINA’s Universality rule to compete in the 50m freestyle on August 13th among the world’s fastest swimmers. Haiti will bring a contingent of 11 athletes to compete at the Olympics Games.

It may be a small step from a global perspective, but Grand’Pierre’s participation is a grand one from the perspective of Haiti.