Half Century Club Members Find Fountain Of Youth In Ontario 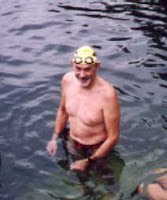 Bryan Finlay provided the Half Century Club of Lake Ontario that includes ten swimmers who have found the Fountain of Youth during their notable open water swims in Ontario.

Bill Sadlo, a member of the International Marathon Swimming Hall of Fame, at the age of 57, was the pioneer in the Half Century Club with his crossing of Lake Ontario in 1957.