Half Century Comparisons Down Under 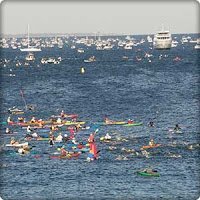 In a follow-up to yesterday’s Open Water Source research on the average time of women vs. men in the open water, it looked at the time differences of members of the Rottnest Channel Swim older group of swimmers – the members of the Half Century Club.

It appears that the average time for women over the age of 50 who have successfully crossed the Rottnest Channel is 8:13.06, just a bit behind their male counterparts who complete the swim on average in 7:59.34.