Hallucinations In The Open Water, A Future Edition Of WOWSA Live 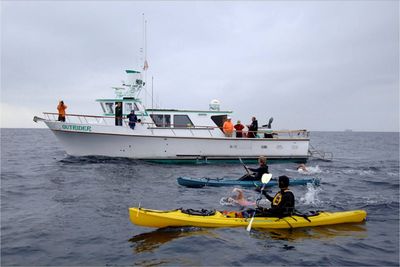 Hallucinations In The Open Water, A Future Edition Of WOWSA Live

The venerable Dr. Vicki Keith C.M. spoke about many hallucinations during her marathon swims during her WOWSA Live interview.

A special future edition of WOWSA Live will be conducted with Dr. Keith and others.

These swimmers have all experienced hallucinations during their long swims. “It will be an edition that will be filled with remarkable recollections of remarkable swims by remarkable people,” predicted Steven Munatones.

“Open water swimming, especially in a non-competitive environment, is occasionally described by some as being meditative or a form of aquatic zen.

Swimmers can zone out for long or short periods where their mind thinks of nothing concrete, one specific thing over and over again, or lots of different thoughts crisscrossing the brain all at once.

Open water swimming can be relaxing and an effective means to get away from the pressures and stresses of the land.

It is alluring and inviting to achieve this level of separation from the responsibilities faced on terra firma. Renowned for its powers of reinvigoration and rejuvenation, swimming has an allure and a healthfulness about it that is undeniable.

While the repetitive act of pulling and kicking does require a level of focused thought, it is like riding a bicycle or driving a vehicle after learned and mastered. That is, the intensity of focus to actually be able to swim is not that high.

But there are times among certain athletes when the intensity of experience and chemical firings in the brain go into overdrive. Usually these athletes place themselves in extraordinarily extreme conditions where either the natural elements or sheer amount of time in the water push them over the brink, mentally. It is at these times that open water swimmers can begin to hallucinate in the water.

Hallucinations by swimmers in the open water occur, albeit rather infrequently. To the swimmer, these hallucinations are as vivid as real life, substantial enough to cause specific (negative) reactions, and occasionally involve marine life (e.g., sharks), imaginary creatures (e.g., monsters), or a transformation of oneself (e.g., into a tiny being), one’s crew (e.g., into pirates), or other involvement by people in one’s life (e.g., friends or family members).

Hallucinations can be potentially dangerous as channel swimmers can choose to swim away from their escort boat due to innate fear (of their crew) or misperceptions of intent (by their crew). Hallucinations can also lead to unintentional actions by the swimmer (e.g., punching of a crew member or yelling violently at a friend or spouse onboard the boat). The hallucinations can be visual (e.g., large creatures emerging from the depths), auditory (e.g., hearing of voices or orders to do something), tactile (e.g., a feeling of shrinking or enlarging), or a wide host of other sensory reaction to the environment or one’s own self because of hypothermia, hyperthermia, long durations in the water, fatigue, pain, or hunger.

More often than not, the hallucinations tend to be malicious, fearful, or scary. These bouts of perception can cause the swimmer to occasionally make self-determined decisions that are not in their best interests (e.g., not drinking or eating because they think their crew is feeding them poison or swimming away from their boat or support crew). At these times, the escort crew must make quick decisions whether to immediately pull the swimmer from the water or add another safety element to the equation (e.g., place a pace swimmer or additional kayaker near the swimmer) if so judged by the coach and crew. For once the swimmer starts to hallucinate, the inherent risk of the swim increases significantly and the probability of an unanticipated emergency occurring goes up substantially. If the swimmer and crew are far away from shore or qualified medical assistance, this is most definitely a situation to be avoided.”

Future swimmers can learn from the experiences of Dr. Keith and her marathon swimming colleagues.

Photo shows an alert support crew, a pace swimmer, and kayakers supporting a channel swimmer in the Catalina Channel escorted by John Pittman on the Outrider.