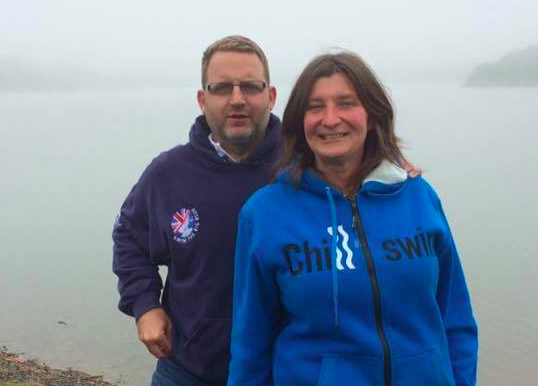 Jane Hardy is a brave and hardy women.

She knows how to handle herself – and very importantly – others in the high seas as a Coastguard Rescue Officer at the British Maritime and Coastguard Agency. Her experiences and know-how have served her well in her profession and over the last 8 years in the open water swimming community.

Hardy is about to embark on Ben Hooper‘s Swimming The Atlantic: 2,000 Miles Africa To Brazil from Senegal to Brazil as its official observer.

While Hardy has done swims like the Freedom Swim in Siberia, the Dart 10k in England, a Loch Ness relay in Scotland, and swam between islands off the west coast of Scotland, she is very excited about being the official observer on a transoceanic stage swim.

“I learnt how to swim 8 years ago, but I’ve been making up for lost time ever since.”

She is leaving home in mid-October to undergo a few weeks of acclimatization training. She plans to be all set to on November 1st and cross the Atlantic with Hooper and his team for at least 120 days – or as long as it takes. “I’m with Ben for the duration so reckon [that] I’ll be away from home for about 5 months.”

It is a long time to be at sea and away from home, but Hardy has planned things well. “I’ll be at sea for Christmas and my 50th [birthday] in January. I’m married with 4 kids, but they’re all behind me – 3 are over 18 years ago. The youngest will be 13 when I leave – he will feel it the most, but hopefully he’ll want to take on once-in-a-lifetime challenges too one day when he’s bigger.”

She is not particularly nervous as she has purchased a one-way ticket to Senegal and plans to fly back home from Brazil.

Besides her official duties, she does plan to get in the water during the transoceanic stage crossing. “As a swimmer, I’d like to get in the water. I can’t imagine anything more painful than looking at nothing but water for 4 months and never getting in. But it’s Ben’s swim and Ben’s challenge so I have to respect that when it comes to swimming.”

Her involvement with Hooper’s swim has gradually developed since she originally met Hooper to help him organize a local charity swim. “I was so excited to be actually meeting a person who would even contemplate such a challenge. It was just brilliant that he invited me to be part of his team.

I think anything is possible if you put your mind to it. On a much smaller scale, it’s how I got to swim in a frozen lake in Siberia. With his training and mental strength – and the right support – Ben will do it
.”