Annette Kellerman, the most prolific global-trotting marathon swimmer in her day, reportedly had a mild case of polio as a child. But the polio seemingly did not result in a physical disability later in life.

The dual inductee (Honor Swimmer in the International Marathon Swimming Hall of Fame Class of 1965 and the International Swimming Hall of Fame in the Class of 1964) was the first woman to attempt to swim the English Channel in 1905, but ultimately failed on three different occasions. She found her way to success in the Thames, the Danube, Boston Harbor and the Seine.

She was one of the pivotal figures in the history of swimming because she was instrumental in the evolution of women’s swimwear and famous for her advocacy of the right of women to wear a one-piece bathing suit, which was a controversial issue in the early 20th century. Ultimately, her life story inspired the MGM classic movie Million Dollar Mermaid starring Esther Williams.

International Marathon Swimming Hall of Fame Honor Swimmer Robert Cossette’s childhood polio resulted in some disability in his legs, but he was able to walk and completed the English Channel in 1964 in 12 hours 5 minutes. Cossette was crippled in one leg by polio, but that did not stop him for competing 8 times in the 32 km Traversée internationale du lac St-Jean and many other professional marathon swims between 1955 and 1965.

Harry Hinken, likewise suffering from polio, needed leg braces and crutches to get about. He began swimming as a form of physical therapy. His passion enabled him to be confident and capable enough to attempt crossings of the English Channel three times.

Unfortunately, his attempts were all DNF’s, but Hinken was the first physically disabled man to attempt English Channel crossings. He passed away in 2004. 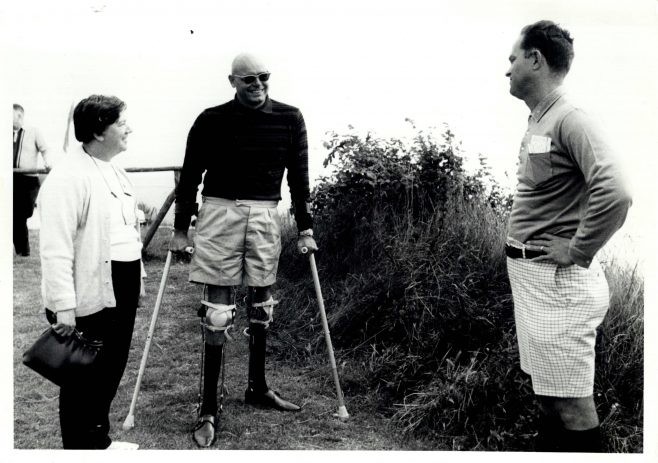 In 1967, with Captain Len Hutchinson, Channel Swimming Association observer Peter Frayne, and Rosemary George on his crew, he was pulled from the English Channel in 7 hours 49 minutes on his first attempt.

On his second attempt in 1968, he swam for 10 hours 19 minutes before the winds and surface conditions became too strong to continue. On his third attempt in 1969, he was only able to 500 yards in 50 minutes, making frustratingly little progress due to the wind and tide. Captain Hutchinson stopped his swim because he was being driven into the rocks.