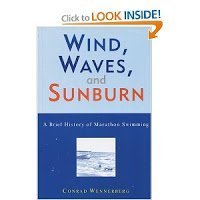 Conrad Wennerberg is the Chairman Emeritus of the International Marathon Swimming Hall of Fame and author of the authoritative tome on marathon swimming called Wind, Waves and Sunburn.

According to his records and research, river swims lend themselves to distortion and gigantic claims of enormous distances swum.

In 1931, Argentina’s Pedro Candiotti swam 211 miles in 71 hours and 45 minutes. Pedro kept attempting his goal of swimming 300 miles from Santa Fe to Buenos Aires – at least 17 times, but he fell short every time. His last attempt was a 74 hour 30 minute attempt before the oncoming tide from the Atlantic Ocean defeated him. His best attempt was 281 miles in 1935 that took a reported 84 hours. He was later inducted into the International Marathon Swimming Hall of Fame in 1965.

Word of Pedro’s exploits stimulated the dreams of his American marathon swimming colleagues, including Charles Zimmy who swam 147 miles from Albany to New York City down the Hudson River in 1938. Clarence Giles followed suit in 1939 in the Yellowstone River with a 288-mile attempt in 74 hours from Blendive to Billings, Montana. In 1940, John Sigmund reportedly swam 297 miles down the Missouri River from St. Louis, Missouri in 89 hours 49 minutes. But Conrad rightly calls into question the veracity of the actual distance covered.

Jamie Patrick will revive this river-swimming marathon tradition, albiet on a carefully GPS-measured 240-mile course, in the Sacramento River in northern California on August 17th. Estimating that it will take him over 40 hours to complete the course, the memories of Pedro, Charles, Clarence, John and Abou Heif will come to the surface.