Heading Out To Sea In Copacabana Beach 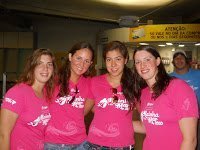 Results and videos will be posted later.

The race between two-time FINA World Cup champion Christine Jennings of the USA and Olympian and 2009 World Cup Series champion Poliana Okimoto should be outstanding where the women battle neck-and-neck the entire distance, televised live throughout Brazil. Heidi George (USA), Alejandra Gonzales (Mexico), Daniela Pinto (Portugal) and Isabele Longo, Lauren Goulart, Fernanda Goes and Betina Lorscheitter (Brazil) will most certainly also be in the mix throughout the race where the swimmers must exit the water for their hydration stations after every 1K to cheering fans and Brazilian music onshore.