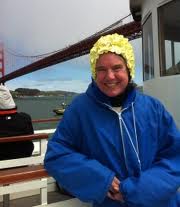 Occasionally, the dreams of ocean swimmers are defeated by small, unseen creatures.

While running into jellyfish are usually unexpected and shocking to many swimmers, tiny ticks can also create unforeseen and unexpected problems for athletes.

She completed her successful 50th Golden Gate Bridge swim on her 60th birthday and had planned on swimming her 100th crossing on her 70th birthday this year.

But along her road to a celebratory Century Swim, Hewko was unexpectedly hit with Lyme disease. The bacterial infection was caused by a bite of a tick and has set her back – but has not defeated her.

For five years, Hewko forged on with her real estate career and her steady counting down to her Golden Gate Bridge Century Swim despite having undiagnosed Lyme disease. But the infection finally caught up with her. “I am basically bedridden and have difficulty walking now. The cure is IV antibiotics and drugs that are delivered intravenously in my arm that goes near my heart for administering the antibiotics.”

Her medication regimen is exhausting, especially for one who has been so active throughout her life. Two hours a day twice per day of two kinds of antibiotics is her medicinal means to fight the disease. “I cannot swim while I have the pic line in me. It is terrible for me because I love swimming so much.”

It is the extreme fatigue that she experiences which is her major obstacle. “I cannot get out of bed.”

Her attempt will be her 92nd crossing, not the 100th crossing as she had originally planned. But her passion and commitment are unchanged. “I will complete 100.”

While ticks will not be encountered in the water, Hewko does caution swimmers to be aware of ticks when walking through brush to get to those remote wild swimming places that often attract them.