Heads Up: What Lurks Around Yonaguni Island

In October 1994, Steven Munatones attempted and completed a solo 29 km circumnavigation of Yonaguni Island, the westernmost part of Japan in Okinawa – only 110 km from Taiwan. But he was not alone in pioneering this circumnavigation swim.

The silver bodies of hundreds of hammerhead sharks circled below Munatones and his two escort boats, each manned with look-outs stationed at the bow and stern. It was more than a bit disconcerting. “The two crew members never took their eyes from me and the water below. They stood at attention throughout the swim – their discipline was very comforting to me. Because I could clearly saw the hammerhead sharks – hundreds of them circling and circling below. At first sight, my heart seemed to be beating out of my chest and I I didn’t want to look down at them – but I also wanted to keep them within my line of sight. Plus, the distance between the sharks and me was pretty far – perhaps 50 meters or more – I could not tell but the water in Okinawa is so clear, they were probably deeper than that. The distance provided a visible barrier in the warm, crystal-clear waters.

Silently and gracefully moving in natural habitat, the hammerhead sharks majestically roamed their territory, deep down below – apparently oblivious and thankfully uncaring about me. I was churning well above on the surface of the azul sea as fast as I could possibly swim. 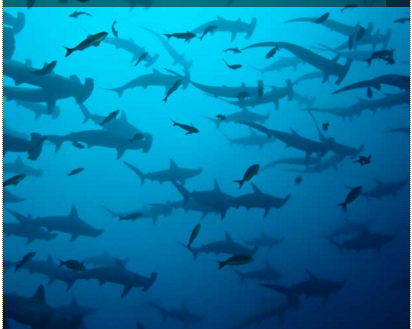 There were also all kinds of schools of fish and turtles casually gently gliding below throughout the 7 hour 8 minute 29 km circumnavigation around Yonaguni Island, one of the world’s renowned spots for hammerheads.

With tricky currents throughout the swim especially around the western and eastern ends of the tropical island (Cape Irizaki and Cape Agarizaki), there was as much to navigate around and along the coastline as well as around the roaming pods of hammerheads.

“Down below, there were plenty of sharks, but on the surface – when I was not staring at my escort boats and support crew, I was mesmerized by the spectacular coastline with its oddly-shaped caverns, caves and rock formations.”

Getting to Yonaguni Island requires a flight to a major airport in Japan and then another flight to Naha, the capital city of Okinawa.

From there, a boat or a flight on small aircraft can put the interested vacationer, swimmer or diver on a jewel of an island with locals to hospitable and knowledgeable as to make any stay a memory of a lifetime.