Hear, Hear! It Was A Fantastic Swim In Marina Martinique 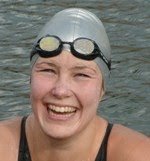 The Cirrus Bio-Ears Swim Challenge Series in South Africa’s Eastern Province, started its season with a bang and a sibling duo.

Jessica and younger brother Jono Roux won a handful of events in this weekend’s event that kicked off the five-part Cirrus Bio-Ears Swim Challenge Series in Marina Martinique (Jeffreys Bay). Jessica won the 5K and 10K while Jono won the 3K and was second in the 5K. “Today’s time was faster than my 10K swim at the [2011] World Championships, so I am very happy with my performance for this time of the season. Conditions in the Marina are perfect for open water swimming and it’s always great swimming here.”

High performance seemed to run in the family during the series: another sibling pair, Wayne and Daniel Jones, placed second and third in the 5K race. The most popular event is the 3K race where Jessica and the Jones brothers posted the fastest times. Full results are posted here.

The third season of the multi-race series includes the following competitions: