Heidi George Added To The Queen Of The Sea Start List 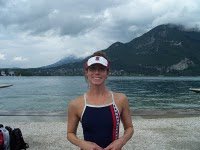 Heidi George, ranked sixth in the 2009 FINA World Cup series, has been added to the King and Queen of the Sea Light Circuit and Challenge in Rio de Janeiro this weekend.

Heidi has race all over the world, so adding another city and race to her resume seems natural.

The King and Queen of the Sea Light Circuit and Challenge is one of the top swimming marathons in the world that will be televised live throughout Brazil in a special 2-hour
Rede Globo program Esporte Espetacular.