Held To A Higher Standard 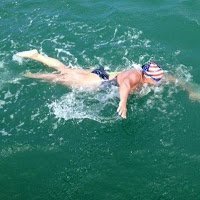 Barbara Held has always been driven and set the highest standards for herself. In her youth, she became the first female firefighter in the city of Los Angeles, California.

In her retirement, she set about to complete the Triple Crown of Open Water Swimming.

One of the crew members of Penny Palfrey’s Cuba attempt, Held surrounded herself with similarly focused marathon swimmers. Training daily year-round in the famed La Jolla Cove near San Diego, the native Californian always prepares well for her challenges.

As a result, she swam one of the fastest times in history among the Half Century Club members (see below) and became the 60th person in history today to join the exclusive club with her 12 hour 10 minute crossing of the English Channel.

The fastest Half Century Club members in the English Channel: