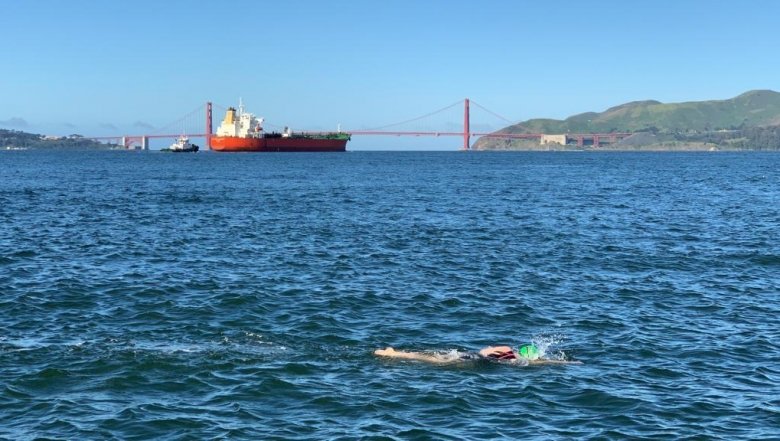 Helen Tonge from Glossop in Derbyshire, England visited San Francisco and became fascinated with the stories of how various prisoners had tried to escape from The Rock, Alcatraz Island.

She transformed that fascination of prisoners swimming to freedom into a charity swim called the Alcatraz Escape Routes Swim. The 3-day swim required her to attempt three separate routes from Alcatraz that prisoners had reportedly taken over a 3-day period. Tonge explains, “Some [prisoners] failed and were captured. Others shot – and some they believe, made it to freedom.”

In April 13th 2019, she set off – and completed the three separate escape routes from the Alcatraz Island in the San Francisco Bay.

Kathy Winkler of Water World Swim described her swims. “Helen started each swim off Alcatraz Island. The clock was stopped when she touched land and raised her hand.

Her cumulative time was 3 hours 45 minutes 16 seconds. For record-setting purposes, all three swims have to be completed in four days without a wetsuit.”

Tonge explained her objective of her charity swim. “I wanted to set myself a challenge, but my point is to raise money for an incredible children’s charity called Wood Street Mission. This is a locally run charity in the North West of England that help children living in poverty with essential things for everyday life. From kitting them out with school uniforms to helping babies with their basic needs. And this year, Wood Street Mission will be 150 years old.”

The charity swim raised more than enough money to provide 25 children with the basics they need for school.