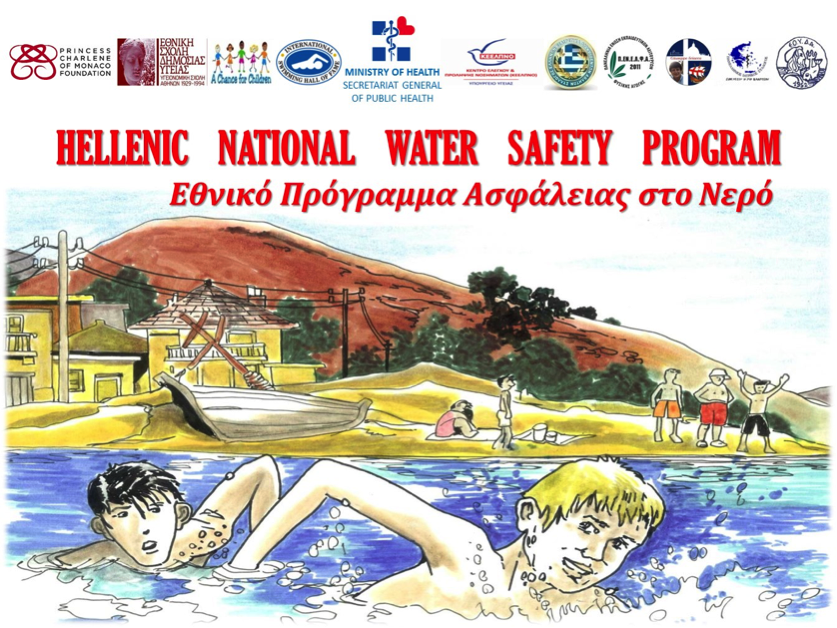 Greece is a country with two mainland peninsulas and thousands of islands throughout the Aegean and Ionian seas.

Along the coastlines and amid the islands, more than 400 people per year lose their lives annually by drowning.

As part of the National Plan for Accident Prevention, the Secretariat General of Public Health at the Ministry of Health launched the National Water Safety Program that aims to raise awareness of water safety and lifesaving as a sport. The program offers 8 educational programs that lead to certification and educational material (see here).

Its Scientific Creator is Dr. Stathis Avramidis who is advisor of Accident Prevention-Health Education and Director of Lifesaving Sport ΕΟΥΔΑ. “Bob Burnside, recipient of the International Swimming Hall of Fame Paragon Water Safety Award, had told me that if we could dream something, we can do it. He was right…Greece now has a National Program. The prestige of the Greek and international organizations that support it, make it illustrious. I thank the scientific committee that approved it, the ‘Baskozos team’ and the organizations that will implement it.”

The Princess Charlene of Monaco Foundation lent its support – as did many others – to promote water safety with its primary objective is to save lives by fighting against drowning. “The mission of the Hellenic National Water Safety Program is to raise public awareness about the dangers of water, teach children preventive measures and how to swim. Efforts to carry this struggle must continue unabated.”

Yiannis Baskozos, Secretary General of Public Health – Ministry of Health, said: “For first time, Greece organizes a national program with zero cost, that aims to fight the aquatic injuries, has the support of international organizations. The Secretariat General aims to serve as the guarantor of aquatic safety this summer. “

Dr. Vicky Bafataki, Secretary General, International Awards Giuseppe Sciacca, said, “With this National Program, Greece contributes to the fight against drowning. This initiative should have been taken a long time ago.”

Dr. Thanasis Giannopoulos, President of the Hellenic Centre for Disease Control and Prevention, underlined, “It is part of our mission to be on the front line for everything that involves accident prevention and I believe that this program will help the reduction of drowning. The various activities of the program will raise public awareness.”

Professor Alkis Vatopoulos, Dean National School of Public Health, added, “It is impossible for a naval country like Greece to lack a National Program. Our School supports its activities and believes that they will contribute to the preservation of public health.“

Dr. Michales Vlastarakos, President of the Pan-Hellenic Union of Medical Doctors, said, “We respond with pleasure in this effort to promote these activities.”

Vaggelis Rakantas, President Hellenic Federation of Underwater Activity, said: “Safety is prerequisite for everything we do. Through lifesaving sport, we will make sure that people will learn how to be safe.”

Marina Toutountzi, President Union of Greek Athletes with Extraordinary Achievements, reported, “This wonderful effort will teach us to respect the water so we can enjoy it safely.”

The National Water Safety Program can be accessed here with its English version available shortly.