Helping Others Navigate The Channels Of Japan 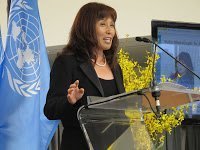 With the growing interest in open water swimming and the Oceans Seven, an increasingly number of people are inquiring about swimming across the Tsugaru Channel.

Yuko Matsuzaki, who is the daughter of the former director of the Japanese Coast Guard, has been instrumental in explaining the needs of marathon swimmers and channel swimmers to the Japanese maritime authorities, from the north of Japan to its southermost islands.

As the only Japanese to be inducted as an Honour Swimmer in the International Marathon Swimming Hall of Fame, she is certainly giving back to teh sport and has been more than generous in her time and efforts to pave the way to help foreign open water swimmers in Japan.

She explains, “I grew up knowing the Japanese Coast Guard very well. In previous generations, open water swimmers were considered to be unwelcomed guests. But many swimmers, both Japanese and non-Japanese proved that swimmers can cross channels without trouble while follow the rules of the ocean. Once a swimmer jumps into the water [to start a channel swim in Japan], the Japan Coast Guard officers will keep a very close watch and assist to ensure the swimmer’s safety and success. But I advise, when swimmers arrive in Japan, they should take many pictures. They will love the Tsugaru and Tohoku regions.”

Yuko has also helped swimmers in the south of Japan in Okinawa, from Yonaguni Island to Ishigaki Island.

Photo of Yuko Matsuzaki speaking at the United Nations by Skip Storch.