The Heroes And Heroines Of The Catalina Channel Swimming Federation 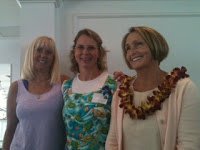 The sold-out Catalina Channel Swimming Federation annual banquet brought together the who’s who of the 2011 Catalina Channel season and its past heroes yesterday in San Pedro, California. Heroines of yesterday like Lynne Cox and Cindy Cleveland rubbed shoulders with the current generation of channel conquerors in the 30th anniversary of the Federation. Volunteers, kayakers, administrators and pilots were also honored for their unselfish efforts and passionate love for the sport.

Unselfishness and passion were clearly the dual themes of the banquet. When volunteers, kayakers and administrators were called up to the stage, many were former or current channel swimmers. Giving back was a mantra that did not have to be explained to these individuals.

Lynne Cox was the keynote speaker and shared a number of stories and experiences with the community. She was asked about the mammalian connection between those inhabitants of the ocean and marathon swimmers. “Dolphins were around me in the Cook Strait…I wonder if there is some ability of dolphins to know what the humans are experiencing.” She explained what she ate on her swims, “I am very happy to drink warm apple drink and raisin oatmeal cookies. Bagels with peanut butter are also good.”

She described hypothermic conditions and information she discovered as a result of her numerous extreme swims around the world. “People do better when they are pulled out of the water horizontally rather than vertically when they are severely hypothermic. But in less severe conditions, the mind-body connection is so important. Your mind makes a big difference.”

She spoke of the research she took part in and her results. “I sat in a 50°F (10°C) cold tank with the Navy SEALS for 2 hours and my core body temperature increased from 97.6°F to 102°F.” She also talked about a research project where she dipped her hands in ice buckets. While the other individuals involved in the research were found to shut off their blood flow from hand to core, Lynne’s body and acclimatization over time has enabled her physiologically to transfer minute amounts of blood between her hands and core. Many of her experiments were part of studies to explore hypothermia and afterdrop.

“I learned that the polar explorers advised that movement and eating are important to prevent afterdrop. So after my swim (in Greenland), I kept moving after getting out of the 26.6°F water where the swim started at 32°F (0°C).” Despite her successes, the swims were never easy. “I was so cold, I couldn’t wave with my hands. I gave my crew the ‘Seal Beach wave’ – a wave with my foot. I always told my crew, ‘Please do not tell me how cold the water is.'”

Other heroes and heroines who were honored included 26 solo swimmers from 4 continents and 20 states who join the esteemed Catalina Channel club:

Pat Gallant-Charette of Maine (14 hours 11 minutes) mentioned that “I went on the Internet and your stories all inspired me. I found the beauty of the sport on my first swim..”

Kevin Anderson (11 hours 57 minutes) in talked about how easy the Catalina Channel Swimming Federation makes it for the swimmers to apply, a comment repeated by swimmer after swimmer.

Bob Needham from Oregon (13 hours 10 minutes) teared up when he talked about his daughter during his channel crossing. “My daughter had never been in the ocean and never been out in the open water at night, but she got right in and was a champ at night on the ocean.” He also spoke of long-lost dreams realized in 2011. “I applied to the Federation 28 years ago, but never got around to it until 2011.”

Triple Crown swimmer Mo Siegel from New York (13 hours 8 minutes) in commented, “The Catalina Channel is very special, you have good thing going here. And the finish is unusual among the kelp and rocks.”

Hank Wise, captain of the Long Beach Swim Focus record-breaking relay team (6 hours 53 minutes), encouraged his local friends, “Catalina is just like a buoy for us Long Beach guys. We see it every day. It is just out there for us.” Other successful relays this season included the Aquaboomers (8:08), Wave Breakers (11:32), Leave It To Beaver (11:01), and Are We There Yet? (11:40).

Cindy Cleveland (shown above with other channel swimmers Anne Cleveland and Marcia Cleveland) was honored for her unprecedented 48-mile swim on August 16th, 1979. She was so humble, but beaming with a gracious smile and heartfelt appreciation to the standing ovation.

When Forrest Nelson spoke about his solo 25 hour 35 minute circumnavigation this July – the only clockwise circumnavigation attempted and completed. He spoke about the advice he received from Cindy and escort pilot John Pittman, “You can fight the winds, but not currents” in picking his direction.

The rules of a circumnavigation were explained by board member David Clark, “Swimmers must close the loop in the water, they must swim past their start point in the water, but they are timed from the shore start to their shore finish. They can pick anyplace on the island. The toes must be dry at the start and they must finish with your toes dry onshore. “

David deservedly received the John B. York Award for his decades of exception service and dedication to the Federation.

The theme continued throughout the banquet with showers of gratitude expressed to everyone who plays a part in the channel community including pilots Greg Elliott and John Pittman, observers like Grace and Neil van der Byl and coaches/observers like Anne Cleveland.