He’s Baaaaackkkkk. The World Versus Ous 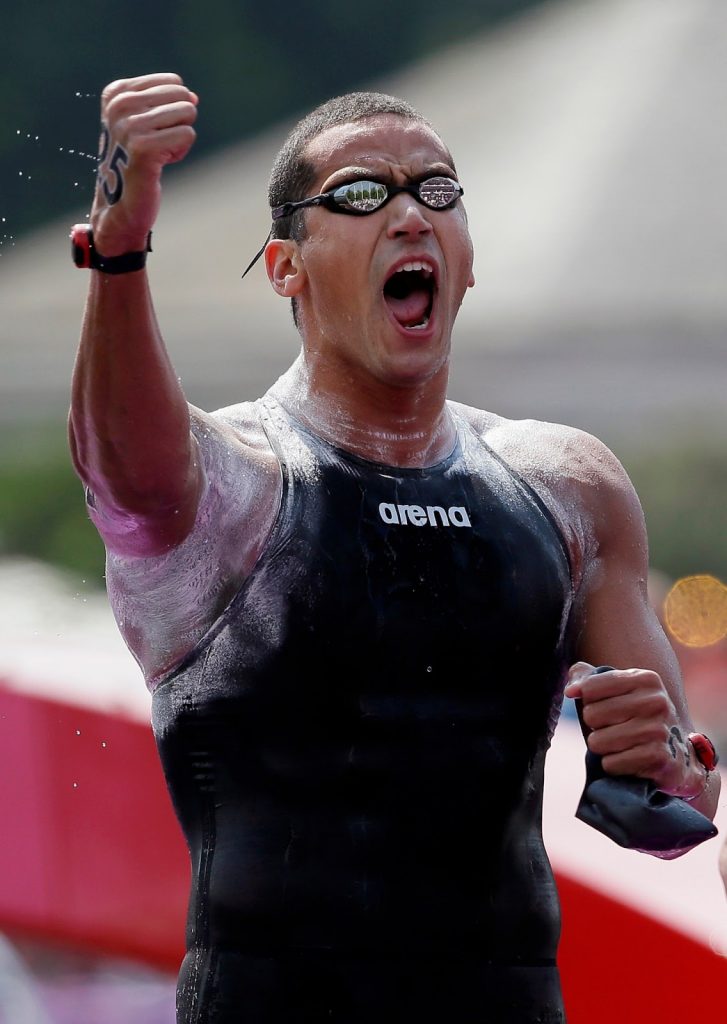 He pulled off a brilliantly tactical marathon swim that played to his strengths at the 2012 London Olympic Games. Tunisian 3-time Olympic medalist Oussama Mellouli was apparently ready to ride off into the sunset as one of the greatest long distance freestylers of all time, but it was not to be.

In his post-Olympic glory, Mellouli got a little more taste of what the open water swimming world is all about: beautiful beaches, close camaraderie between athletes, dynamic conditions, and exotic locations. After London, Oussama Mellouli visited the Cayman Islands and swam in Seven Mile Beach as well as visited Rio de Janeiro and swim in the King of the Sea competition on Copacabana Beach.

Instead of the pressure-packed ready-room in international pool competitions, Mellouli was soaking up the sun and enjoying the espirit de corps of the open water swimming community.

While there was less of an edge to his powerful strokes compared to London, his smile shone brightly on the sands of Grand Cayman to shores of Brazil. “He was so low-key and stress-free at both these events,” said Ashley Twichell and Lexie Kelly who were also competing at those competitions. “And he really got to know the open water community and all the guys like Trent Grimsey and Chad Ho on the circuit.”

So instead of hanging up his swimsuit and goggles, Mellouli is back. AFP reported the Tunisian star clarifying his goals, “I want to make the World Championships, which mark the 10th anniversary of my first medal at the World Championships in Barcelona in 2003. I want to do the open water and the 1500m too. After London, I said that I was ready to go out the door. But I reassessed my situation and set new goals around my new passion, open water. It’s nice at my age and after the career I have had to have this kind of stimulus. I have maintained my figure, but I’m not in intensive preparation,” he said. “Four months before the Worlds I’ll look at things and consider beginning the Olympic cycle again seriously.

Mellouli will have plenty of time between the 10 km marathon swim scheduled for July 22nd and the preliminaries of the 1500m on August 3rd and finals on August 4th in Barcelona for the 15th Barcelona World Swimming Championships.

In an interesting twist, his Olympic coaches Dave Salo and Catherine Vogt will also be in Barcelona. But unlike her coaching and feeding duties on the Serpentine where she was able to help Mellouli to his first marathon swimming gold, Vogt will serve as the head coach of the USA team, strategizing with the Americans how to beat the tough Tunisian.