High Fives All Around For DRIVEN 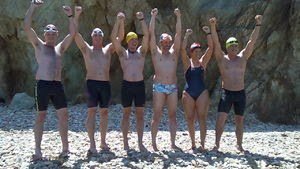 Julian Rusinek, a channel swimmer from California, talks about the documentary film DRIVEN: “DRIVEN penetrated directly into my strongest childhood memories. I wasn’t watching a movie about swimming, I was being told a story. Rarely do we see a movie that is larger than the screen itself. DRIVEN by far was one of those movies that I became absorbed in its characters, its story, and its cinematography. It achieves a three-dimensional reality and freedom of movement that is exciting and new.”

Kelley Prebil is similarly positive about the film. “DRIVEN shows what true marathon swimming is and what it takes to be a marathon swimmer. Marathon swimmers are ordinary people doing extraordinary things. They all do it for different reasons with a core base of pushing themselves mentally, emotionally, and physically. The movie shows what it really takes to be a marathon swimmer as there is really little hoopla, press, or attention-seeking involved. Marathon swimmers don’t have to be the fastest swimmer or have the best technique or been swimming since childhood; they just need the drive to accomplish their goals which can’t be taught. Driven shows that marathon swimming isn’t about conquering a body of water, it’s a journey in learning about the human spirit…with just a swimsuit, cap, and goggles.”

Masters swimmer Eric Peters says, “I am a U.S. Masters pool swimmer that thoroughly enjoyed this film. I liked the stories of the three swimmers and how different each was, yet they all had a common love of ocean marathon swimming. I was inspired to swim more, especially in the ocean! This film is a must see for all swimmers and non-swimmers.”

Belinda “Bee” Eichenwald gives her impression of the film, “I thought I was an endurance athlete until I saw this movie. I was truly humbled. Not only did these athletes go through rigorous training program but they had to fight so many elements to achieve their goal. Their mental tenacity was truly impressive! Inspiring, uplifting, motivating and amazingly all true stories.”

Filmmakers Ben Pitterle and Brian Hall captured the essence of the elite echelon of marathon swimming with DRIVEN.

DRIVEN will be featured in the Santa Barbara International Film Festival on February 4th and 7th and the San Luis Obispo Film Festival in March.

For more information and tickets to the Santa Barbara International Film Festival, visit here. A new website is here at www.marathonswimmovie.com.