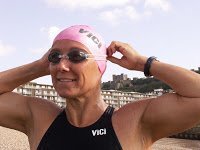 Penny Palfrey will attempt to swim 68.26 miles from Little Cayman to Grand Cayman on her upcoming Bridging The Cayman Islands swim scheduled for June 9th.

Her logistics team, together with her communications team, will attempt to keep her family, friends, fans and global media up-to-date throughout the swim on her progress and conditions via a variety of means that were not possible even a few years ago.

The communications tools at her disposal are impressive.

Her lead escort boat will have the standard SPOT Satellite GPS Messenger technology that will track her progress throughout her swim. As her support crew will lose mobile phone coverage 5-7 miles offshore of both islands, SPOT enables her location to be tracked in near real time using Google Maps.

After SPOT is activated, it acquires and sends the GPS coordinates of the boat – which is less than 15 meters to Penny’s actual position at all times to her SPOT account automatically every 10 minutes.

Of course, prior to the start of the swim, 5-7 miles offshore from Little Cayman and towards the end of the swim as she approaches 5-7 miles from Grand Cayman, tweets, retweets as well as Facebook messages and photos will be uploaded to various pages, Groups, blogs and websites.

Audio updates using the newest LiveOpenWater technology and Open Water Source will further enthrall, engage and educate Penny’s followers throughout the estimated 30-40 hour swim. At least every 30 minutes throughout the swim, Penny’s team will call in real-time updates from the escort boats that will be transmitted online so media and fans can be kept abreast of Penny’s progress. Color commentary on her condition, the conditions out in the middle of the Caribbean Sea and throughout the night will not only be made in real-time, but also archived for later review and historical perspective.

And, finally, video images taken by helicopters at the start, in mid-channel and as she is approaching Grand Cayman. The helicopters will be flown back and forth to provide video content with Penny’s command communications central which will then the images to interested media outlets for worldwide distribution.

The local radio stations and Ministry of Tourism will also be reporting live throughout the swim and supporting Penny’s swim which has truly captured the interest of the idyllic island nation.

“Mr. Flowers, the Flowers Group, the Ministry of Tourism and all the sponsors have done an amazing job at setting up the ideal conditions and support team for her success,” said Lexie Kelly who will be coordinating communications onshore. “They are setting the standard for supporting and communicating major solo swims in this era of worldwide, real-time interest in unprecedented marathon swimming attempts.”

So once she starts, despite being thousands of miles away from the media capitals of the world, her progress and conditions will be made public over the course of nearly two days of non-stop swimming.