Highlights And History Of the Ka’iwi Channel 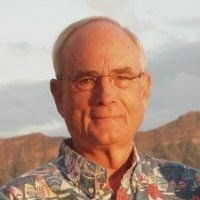 Peter Young is president at Hookuleana LLC and former Director and Chairman of the Hawaiʻi Department of Land and Natural Resources, where he was responsible for a US$100-million budget and nearly 1,000-employees overseeing Hawai`i’s natural and cultural resources, including ocean waters, coastal programs, and natural area reserves. With family roots in Hawai’i going back to 1820, knows very well his local geography.

He explained the excerpt from The Wind Gourd of Laʻamaomao and the described some highlights and history of crossing the Moloka’i Channel in Hawai’i.:

The winds will turn before you and find you,
You’ll be overwhelmed, O deaf aliʻi,
The winds will gather,
The naʻenaʻe leaves will bend,
You’ll be swept ashore at Awāwamalu.
Caught in the fishing net of the head fisherman,
Your thigh bone and upper-arm bone
Will be made into fishhooks,
To catch the paoʻo and the ʻopakapaka,
Your flesh will be without bones,
The black crab, the shearwater will eat your remains,
The life from the parents will be broken off.
Here I am, the ʻaumakua kanaka,
Listen to my life-giving words,
Keawenuiaʻumi, come ashore, a storm is coming,
When you sailed yesterday, it was calm.

Wāwāmalu or Awāwamalu (“Shady Gulch or Valley” – referenced above) was on the Waimānalo side of the Ka Iwi Coastline, known today as Sandy Beach. Corpses of fisherman and sailors who drowned in the Kaiwi Channel were swept ashore by the currents there and at other spots along the southeast coast of Oʻahu, like Hanauma Bay. (Ka Poʻe Kahiko 76)

The meanings of the two core words are: ka (the) and iwi (bone.) This is the literal meaning of the word iwi, but we can be sure that there is also a deeper meaning, for bones of ancestors were very sacred; it was in the bones that mana (supernatural power) was believed to have been stored and that it remained in the bones even after death. (Marion Kelly)

This coastline is called Ka Iwi; it fronts Ka’iwi Channel. It may have been named for the bones of lost travelers who failed to make the crossing between Moloka’i and Oʻahu.

Others suggest it may be because the raw, wild, volcanic landscape of the area, rising from the sea, reminded the ancients of the exposed bones of the earth.

The ancient Hawaiians paddled the channel waters in their canoes for food, recreation, trade, communication and military purposes. The rich history of the islands is full of accounts of mythical demigods and real-life heroes testing their skills on the oceans. Control of Hawaiʻi’s channel waterways was an important part of Hawaiian society. This importance is reflected today in modern Hawaiʻi’s claim to state ownership of interisland waters (Hawaiʻi State Constitution, Article XV). (NOAA)

Control of the interisland waterways was an extension of domination of the land by the aliʻi. The “nature of the dominion exercised over a channel lying between two portions of a multi-island unit was based on Polynesian rather than Western concepts.” The Polynesians view the surrounding waters as part of the land. Control of the ocean by Hawaiians was implicit in the control of the islands themselves. (NOAA)

Kaiwi is known for the Kualau or Kuakualau – the strong wind and the rain out in the ocean. It is customary for it to blow in the evening and in the morning but sometimes blow at all times. “Where are you, O Kualau, Your rain goes about at sea.” (McGregor)

Wind speeds decrease in the lee of each island; whereas winds in the channel increase in strength. The area out in the channel is subject to heavy, gusty trade winds. These winds had an effect on the waters in the channel; “… the ship turned toward Lae-o-ka-laau. As we went on the Kualau breeze of Kaiwi blew wildly, and many people were bent over with seasickness“. (Ku Okoa, 1922; Maly)

In Hawaiian tradition, Lāʻau Point on Molokai represents a point of no return. For those traveling by canoe from Oʻahu to Molokai across the Kaiwi Channel, once Lāʻau Point is sighted, there is no turning back to Oʻahu. More commonly known today as the Molokai Channel, the Kaiwi Channel separates the islands of Molokai and Oʻahu; it has the reputation as one of the world’s most treacherous bodies of water.

The channel is about the length of a marathon (26.2-miles) but it’s a body of water; annually, swimmers, paddlers and others seek to cross its span as an individual achievement, or the glory of participating/winning a race.

In 1939, William K Pai is reportedly the first person to swim the Kaiwi Channel, from ʻIlio Point on Molokai to the Blowhole near Oʻahu’s Sandy Beach (because he first paddled a little offshore before swimming, it was ‘uncertified.’) Since then, several others have tried and succeeded.

We are reminded of the hazards and risks crossing Kaiwi Channel, when on March 16, 1978, Hokuleʻa left Ala Wai Harbor in Honolulu on a voyage to Tahiti. According to the Coast Guard report, the canoe left O‘ahu in 30-knot trade winds, with clear skies, 6-8 foot seas from the NNE, and 8-10 foot swells from the NE. (PVS) “Swells were high, but the canoe had ridden out such seas before. However, this time it was heavily laden with food and supplies for a month’s journey. The added weight put unusual stress on the canoe, making it difficult to handle. Turning off-wind eased the strain but it also caused the sea to wash in over the gunwales, filling the starboard compartments and depressing the lee hull. Winds pushing on the sails rotated the lighter windward hull around the submerged lee hull, now dead in the water. Five hours after leaving Ala Wai Harbor, Hokule‘a was upside-down in the sea between O‘ahu and Molokai. All that night (sixteen crew members) clung to the hulls of the stricken vessel, huddling to protect themselves as best they could from wind and wave. Daylight came. Airplanes flew overhead but no one saw Hokuleʻa. …. Most alarming, though, was the fact that the canoe was drifting away from airline routes, decreasing its chance of being spotted.” (Will Kyselka, An Ocean in Mind; PVS)

“Eddie Aikau wanted to go for help. An expert waterman, he had saved the lives of many swimmers in trouble in the powerful surf of Waimea Bay on the north shore of O‘ahu. … Eddie would go alone. The crew, clinging to the overturned hulls, watch(ed) in silence as he rode the waves into a fate not unknown to many of the people of old who sailed toward distant lands.” (Will Kyselka, An Ocean in Mind; PVS)

In the early morning of March 18, 1978, the Coast Guard arrived to assist the Hokuleʻa; later that day, they sighted Aikau’s surfboard. Eddie was never seen again.

Note: The ocean swimmers who have completed a crossing of the Moloka’i Channel include: