Keo Nakama, an inductee in the International Marathon Swimming Hall of Fame, was a multi-sport star and one of the greatest swimmers of his era. And, boy, did he use some classic goggles. Too bad manufacturers don’t make those anymore. Fit is always important, but check out how hip and cool Nakama’s goggles were. 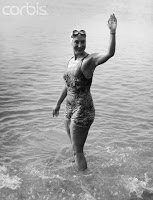 Marilyn Bell of Canada (shown on left) and Florence Chadwick (shown on right), both International Marathon Swimming Hall of Fame Honour Swimmers, also seemed to wear similar goggles on their marathon swims (in Lake Ontario in Canada and the Catalina Channel, respectively). 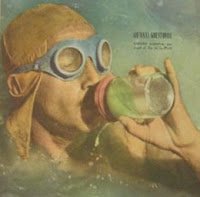 As we reminisce about old-school goggles, we should not forget these home-made types from yesteryear or around the world. On left, Antonio Abertondo of Argentina, an International Marathon Swimming Hall of Fame Honour Swimmer, shows off his goggles and cap.

Above right and on left, these photos show the goggles made out of wood fashioned by the Bajau free divers in the South Pacific. Photos by James Morgan.

Tom Blower used some old-school goggles on his unprecedented 15 hour 26 minute crossing of the 33.7 km North Channel between Ireland and Scotland in 1947. Copyright © 2008 – 2011 by World Open Water Swimming Association