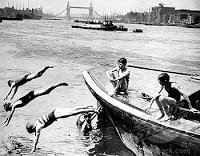 The history of swimming in the River Thames goes centuries and is being revived by the contemporary open water swimming community.

Race director Steve Newell provided details of the tenth anniversary of the Great River Swim in the River Thames in London. “The race will be held on Saturday, June 25th starting from the Chiswick Pier.

The one-mile course will include a clockwise circumnavigation of Chiswick Eyot, the furthest downstream of the islands in the Thames in London.”

The swim is a revival of an annual swim in the tidal Thames during the early years of the 20th century. Between 1907 and 1939, up to 100 men and women swam from Richmond Lock to Blackfriars Bridge, a distance of 13 nautical miles (24K). On an ebbing tide, the better swimmers completed the course in under three hours.

Steve explains the difference between the other great swims in Great Britain, “The event is not part of the Great Swim series which uses docks, lochs and lakes. This is a swim in England’s Great River and is not for the fainthearted.”

It is certaily a revival that is most welcomed.

Photo by Science and Society shows boys swimming in the River Thames at Rotherhithe, London in 1934. For more information, contact Steve Newell.