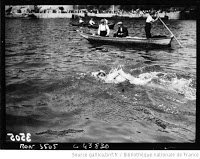 The unique aquatic challenge is combined with a tour of Paris that will take swimmers from the Josephine Baker swimming pool to the Parc André Citroën, via the Louvre, the Place de la Concorde and the Eiffel Tower.

Swimmers will also swim under the famous bridges of Paris, the Pont Marie, the Pont Neuf, the Pont des Arts and the Pont Alexandre III.

The organizers aim for the event to eventually become the largest open water swimming event in France.

The event’s roots go back to its original edition held in 1905. The 2012 edition will be the first revival event held after a 60-year hiatus.