The History Of Open Water Swimming 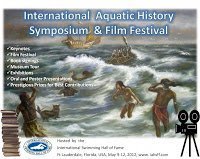 The International Swimming Hall of Fame announced the inaugural International Aquatic History Symposium & Film Festival (IAHSFF) that will be held in Ft Lauderdale, Florida, USA between May 9th – 12th, 2012.

One of the presentations will be “The History of Open Water Swimming – From The English Channel to Hyde Park“. The presentation will examine how the sport of open water swimming has evolved from 1875, when Captain Matthew Webb made the first successful crossing of the English Channel, to the Olympic 10K Marathon swim in August at the 2012 London Olympics.

The presentation by Steven Munatones will explain how the influence of the first English Channel swimmers continues to this modern day, but how the addition of open water swimming to the Olympics, the explosive growth of triathlons, the growing interest in endurance sports and fitness among the baby boom generation, and increased online social awareness and connectivity are major factors that have catapulted open water swimming to become the fastest growing sport in the world today.

Key periods of growth in the sport – in the 1920s, 1950s, 1970s and post 2005 – will be described by the Chief Administrator of the International Marathon Swimming Hall of Fame. “Growth has significantly accelerated after the marathon swimming was added as a medal sport by the International Olympic Committee in September 2005. Since that time, the average number of new open water swimming events around the world has increased at a rate of more than one per day. Whereas, in the 1990s when the center of the open water swimming world was considered to be the United States where 224 open water swimming competitions were conducted, there are now over 900 events in the United States and, we estimate, over 6,000 events worldwide.

The number of non-sanctioned events have grown much faster than sanctioned swims. For example, FINA sanctions 17 events and USA Swimming fewer than 100 events, but there are thousands of swims around the world that exist outside the umbrella of the traditional pool-centric governing bodies. And the composition of the sport’s participants is also growing in age as well as in size. An analysis of the race results of key events show that the fastest growing demographic is women over the age of 40 while the largest single demographic group remains men between the ages of 30-49

“But there are also areas of significant potential for the sport to evolve. And it will continue to evolve in innovative ways,” says Steven. “For example, charity swims in the United States and elsewhere have been largely focused on raising funds for health issues (heart, cancer, and diabetes), opportunities (Special Olympics or canine companions) and medical assistance (for war veterans). While it appears that the open water swimming community has a lesser impact on environmental awareness and fund-raising efforts than its counterparts in the surfing community, this is changing. While the alignment with established environmental groups have helped, the impact of online social networks (Facebook, Twitter and YouTube in particular) are enabling swimmers and events to effectively serve as catalysts to draw attention to additional social and environmental issues – all in an especially positive and constructive manner.”

As trends continue, open water swimming will continue to grow and enjoy an even greater renaissance between the 2012 London Olympics and the 2016 Rio Olympics.