History Of The Triple Crown Of Open Water Swimming 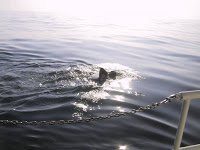 Research into the term ‘The Triple Crown of Open Water Swimming‘ is ongoing, but here is some preliminary findings.

The earliest references found to date go back to 1987 in Southern California when the term Triple Header was noted in an article in The San Diego Union-Tribune.

In a February 6th, 1987 article about Jack Robertson, the San Diego Union-Tribune wrote, “…‘So this year I’m trying for a triple-header: the English Channel (21 miles), the Manhattan Island Swim in New York (28.5 miles) and Catalina Island (26 miles back to the mainland).’ Robertson will attempt the tantalizing triple within a three-month period, beginning with Catalina in early June, the English Channel in July and Manhattan in August.”

A rare triple was referred to in an article run by Associated Press on July 31st, 1988 about Ashby Harper. “Harper’s plan is to accomplish the three marathon swims within a six-week period, starting with Sunday’s scheduled swim around Manhattan Island. His timetable calls for him to cross the English Channel from France to Dover, England, sometime between Aug. 21-23, and make the Catalina Island swim on September 12.”

Research is being conducted to additional reference made to the Triple Crown of Open Water Swimming in Outside Magazine or the U.S. Masters Swimming magazine around 1995.

Beginning in 1996, the NYC Swim press releases started to refer to its other marathon sister swims, the 21-mile English Channel and the 21-mile Catalina Channel, as a way to try to explain marathon swimming to the general public. Among the American media, the English Channel was well-known, but many did not know the location of the Catalina Channel. Over the years, as the New York City events grew in popularity and received a good amount of media attention in print and television and rigid safety standards that were required to escort swimmers through busy thoroughfares, the Manhattan Island Marathon Swim became more accepted and the Triple Crown list, researched and developed by Dr. Scott Richards, became a generally accepted term and was added to the Open Water Swimming Dictionary in 2008.

Even as marathon swimmers get more adventurous, swimming for longer distances in increasingly difficult conditions in colder waters around the world, the Triple Crown remains with now 41 swimmers on its list. Perhaps not surprisingly given the demographic trends in the sport, a few of these Triple Crown swimmers are also concurrently members of the Half Century Club.