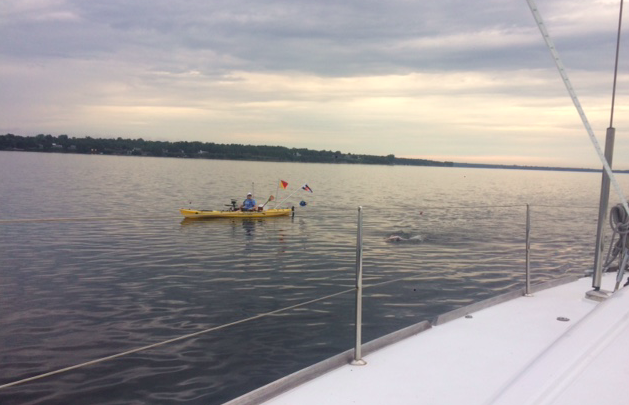 After swimming 80 miles (128.7 km) in a solo crossing of Lake Powell along the Arizona-Utah border in the USA in October 2016, a swim that took her 56 hours 5 minutes, Thomas is upping the ante and pushing herself to cross the 100-mile threshold.

“She’s doing really well [so far], reported Elaine Howley of the Marathon Swimmers Federation. “The water is glassy, almost no wind at all. We got rained on a little this afternoon, but the storms we’d been concerned about never materialized.”

So far, so good on the first day of the potential 72-hour swim.

The Marathon Swimmers Federation described her 104.6 mile (168.3 km) course in Lake Champlain. “This is a loop-style course starting in Rouses Point, New York, proceeding south and around Gardiner Island near Charlotte, Vermont without landing, and returning to the start.”

In Lake Powell last year, even after over 56 hours swimming constantly, Thomas looked remarkably fresh as if she had at least 20 miles left in her. Her stroke looked good and her pace held strong and steady. She was smiling and talking and even joking a bit with the crowd that had witnessed the longest lake swim in history.

“Anyone who knows me and who saw me finish last year’s Lake Powell swim had to know one thing: 80 miles wasn’t my limit. For me, swimming is about testing myself mentally and physically. It’s about doing things that are fun, but also hard and sometimes scary with a huge possibility of failure,” Thomas posted online.

She described her motivation to crack the mythical 100-mile mark. “Once, I thought my limit was a 10k open water swim. With each swim I’ve done, I’ve learned something that has made me stronger and after finishing Lake Powell last year, I knew without a doubt – I could have gone further. We barely made it home before my husband and I were talking about the impossible – 100 miles. With a little (ok a lot) of a nudge from my friend Jamie Patrick, we committed.”