A Hit Of A Crossover Athlete 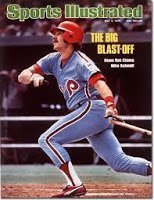 But the International Swimming Hall of Fame reported one of the most prolific and best baseball players of all time was Mike Schmidt, considered by many as the best third baseman in Major League Baseball history, was also a swimming crossover athlete.

A shoo-in for the Baseball Hall of Fame for his career where he was a 12-time All-Star with 10 Gold Glove awards, 8 homerun titles and a World Series MVP, Mike was a competitive swimmer, diver and lifeguard at a club owned by his grandfather.

Despite his family ties to the Phillips Aquatic Club in Dayton, Ohio, Mike made the right switch when he hung up his suit and goggles for a ball and bat.