Hollywood Reverts From The Open Water To Dryland 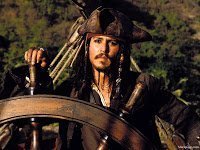 While the general public is increasing flocking to the open water, it seems Hollywood is pulling back.

According to inside reports, Pirates of the Caribbean – On Stranger Tides, the Johnny Depp movie, reduced the number of open ocean scenes when it came to producing the 137-minute blockbuster. The screenwriters created a story that limited the high cost of shooting the film on the high seas. So instead of ship-to-ship combat with pirates dramatically boarding enemy ships, the scenes included jungle chases, London visits and sword fights.

The movie tells of Captain Jack Sparrow (Johnny Depp) looking for the Fountain of Youth along with his nemesis Barbossa, Blackbeard and others, some of which was flmed on the beaches in Hawaii. Movie director Rob Marshall explained, “This [fourth movie in the franchise] is different. We don’t have ship-to-ship battles. Instead, we have a centerpiece scene with mermaids, these sirens of the sea.”

But even the mermaids were hot in a 2.7 million gallon pool on the Universal Studios lot instead of a backlot built on the Caribbean island of St. Vincent like the first film of the series.

But if Captain Jack wants a real-life Fountain of Youth, he might be better served picking up open water swimming.