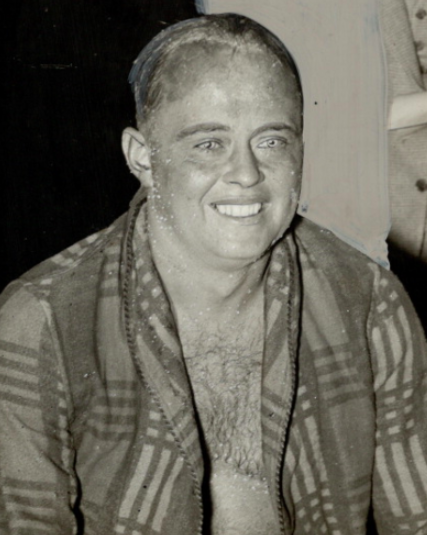 William ‘Bill’ Goll was initially voted into the International Marathon Swimming Hall of Fame in the Class of 2011 under a label Pioneer Swimmer.

Ned Denison of the International Marathon Swimming Hall of Fame explains the recent induction designation change. “In 2017, the Executive Committee agreed that Bill’s induction was simply a voting mechanism and he is now considered an Honor Swimmer.”

Goll was an American open water swimmer from New York born about 1908. To make ends meet, he traveled as a high diver with a carnival during the Great Depression between 1935-1939, but he also enjoyed a long successful marathon swimming career as a member of the World Professional Marathon Swimming Federation.

Goll finished second in the 1930 Manhattan Island Marathon Swim. Over the course of his three-decade career, he participated in nine Canadian National Exhibition races, one of the most prestigious marathon swims of its era, between 1931 and 1954 with many top five finishes including a second-place finish to Marvin Nelson in the 15-mile world championship where he won US$1,500.

In the later stages of his career, Goll participated in at least five 22.5-mile Atlantic City Around the Island Swims in New Jersey between 1954 and 1959, always finishing in the top 10 despite being between 47 and 51 years old.