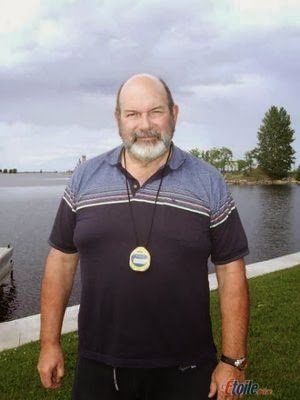 They are on pool decks and shorelines day and night. They spend countless hours on escort boats and kayaks. They study the sport and can analyze the competition and the elements.

The individuals who have been inducted as Honour Coaches in the International Marathon Swimming Hall of Fame include:

Many swimmers speak in the most respected terms when reflecting on their coaches. “I gave the money for the natatorium,” said American television personality Art Linkletter who financed the construction of the Linkletter Natatorium on the Springfield campus.

“But Red gave his life to it.”

Richard “Dick” Campion, Australia, 2010/11
Richard Campion was a world championship individual and team gold medal coach and has promoted open water swimming globally since 1967. After he competed in the 1960 Olympics, he competed on the professional marathon swimming circuit in Italy (1975 and 1976 Capri-Napoli Marathon Swim), Canada (1975 Traversee Internationale du lac St-Jean, 1975 Lac La Tuque 24-hour Swim, 1976 lac Chibougamau Marathon), He won the 1976 Australian Open Water Swimming Championships in the year he was elected President of the World Professional Marathon Swimming Federation. He also served as the President of the Australian Marathon Swimming Federation from 1977-1979 and was a member of the Australian Open Water Swimming Committee from 1988-2001 during which time he wrote the Open Water Swimming handler and trainer’s 25K manual, suitable for 25k, adopted by Australian Swimming and organized the 1999 Pan Pacific Open Water Championships. From 1989-1998, he was the national open water swimming coach for Australia where he coached swimmers to gold, silver and bronze at the 1991 and 1998 World Swimming Championships, the 1991 Pan Pacific Swimming Championships and several international competitions in Italy, France, Canada and the USA. He designed the Australian Swimming 16K Grand Prix Series and, from 1990-1996, he was the Chief Presenter of Open Water Swimming Coaching at Australian National Coaching Conferences and coached a 93K world record 4-person relay from Malta to Sicily in 1996 and English Channel and Manhattan Island Marathon Swim athletes.

Gus Ryder, Canada, 1981
Gus Ryder was an innovative coach whose athletes achieved national and international success as marathon swimmers including Marilyn Bell and Cliff Lumsdon. He founded Lakeshore Swimming Club in 1930 and was named Canada’s Man of the Year in 1955 and was named to the Order of Canada in 1975 for his work teaching disabled children. Ryder swam in a number of Toronto’s across-the-bay long distance races. In 1917, while playing hockey in Toronto, he rescued two players who had fallen through the ice before himself being trapped under the ice. He recalled that this was when he dedicated his life to swimming. Later, he was credited with 47 lifesaving rescues.

Charles “Red” Silva, USA, 1978
Charles “Red” Silva trained several New England-based marathon swimmers for English Channel attempts and was instrumental in organizing man local marathon swims. Charles is also an Honor Contributor to the International Swimming Hall of Fame in 1976 for having coached more than 200 All-America swimmers and an Olympic gold medal winner and served as its chairman of its board of directors.

Tom Watch, Great Britain, 1986
Tom Watch has coached English Channel swimmers for 57 years. For over 60 years, Tom Watch has been a coach and mentor for long distance and channel swimmers needing support, training, encouragement and advice. Tom’s career began with Geoffrey Chapman in the 1951 Daily Mail Cross Channel race who was the first British swimmer to finish. He has accompanied more than 100 swimmers across the English Channel, both from his native Weymouth, but also from across the world. In 1965, he accompanied Phil Gollop, who became the youngest swimmer to cross at that time. Some of the swimmers he has mentored include Marc Newman, Chad Hunderby who made the fastest Channel Swimming Association crossing on record, Peter Jurzinsky, Jacqui Hampson who was the youngest female at the time, Samantha Druce, who at 12 years of age became the youngest of all time and Doc Counsilman, who was the oldest at that time. In 1982, Tom was an Observer on Jon Erikson’s historic three-way swim.

Don Watson, USA 2013
In a small village outside of Chicago, Don Watson created a powerhouse, both in the pool and in the open water. Hinsdale was the center of the professional marathon swimming world when John Kinsella and Sandra Bucha ruled the waves in the 1970′s. Both developed by Coach Watson, they were just two of the many aquatic stars that trained under his innovative tutelage and went on to national and international stardom. But his legacy went beyond the chlorinated confines of the pool and the dynamic nature of lakes, channels and oceans where he spent countless hours mentoring, training and pushing his swimmers. Most of his swimmers did not end up international champions or record holders, but even more importantly they forged a lifestyle where they were victorious in the game of life. Watson knew how to develop kids into champions. His teams were unprecedented powerhouses. He had his high school students competing against the best in the world in his heyday. Whether it was sitting in a boat dealing with rough conditions or early morning workouts, Watson was there. He was a man his swimmers trusted and wanted to swim for, really fast.