Hopes For Heidi, Games For Gan? 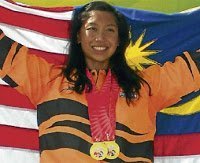 At the upcoming FINA Olympic Marathon Swim Qualifier in Setúbal Bay, Portugual, there are dozens of athletes whose road to the Olympics are back stories that exemplify the global nature of the sport of open water swimming.

A relative newcomer to the sport from a country with beautiful beaches, Heidi Gan of Malaysia is an example of the hopes and opportunities that the Olympic marathon swim has given to dozens of emerging swimming nations around the world.


Gan, a pool swimmer who turned to the open water with dreams of making it to the Olympics, made her first major splash at the international level when she won both the 5 km and 10 km swim at the 2011 SEA Games (Southeast Asian Games). She further honed her skills and demonstrated her potential when she placed in the top 10 in the 5 km and 10 km at the 2012 Australian Open Water Swimming Championships.

After her victory in the Southeast Asian Games, she said, “I have marks all over my body from the jellyfish stings. To me, every sting was a jolt that kept me going. The 10,000 meters is a long race and, sometimes, these ‘jolts’ keep me awake.

My coach (Matt Magee) told me after the race that he even saw a turtle swimming alongside me. Fortunately, I did not see it. I would have surely panicked. Everything’s new to me.”

A native of Malaysia, she described her open water swimming training to the New Strait Times as “…it’s mentally challenging and tough but it is the type of training I require for [Olympic Marathon Swim Qualifier].” And she will need that toughness to place in the top 15 among these competitors in order to make it to London:

The list of Olympic hopefuls in the 10 km marathon swim are posted here.

The list of pre-qualified Olympic marathon swimming finalists are here.