How Does Fukushima Affect The Tsugaru Channel? 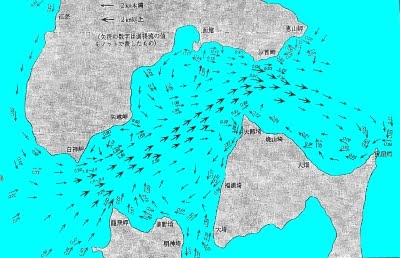 Team Kizuna, a Japanese relay team with 11 members swam across the Tsugaru Channel from Honshu to Hokkaido in 6 hours 40 minutes this past week. Team Kizuna used 3 escort boats to get its 11 swimmers in and out as each swimmer swam for their short stints before exchanging to the next swimmer.

Each swimmer swam for 2-minutes shifts, long enough to sprint and then get a rest for 20 minutes or so before their next leg.

With interest in the Oceans Seven rising along with the continuous fears that the nuclear crisis in Fukushima is continuing to irradiate the water and air in Japan and across the Pacific Rim. The aftermath of the nuclear plant disaster, caused by one of the most massive earthquakes and tsunamis to hit the area, is explained below. In the video below, Fukushima is located well south of the Tsugaru Channel. But with the dissemination of nuclear waste across the Pacific Rim, there appears a possibility of swimmers getting harmed by radioactivity due to swimming in the Tsugaru Channel, but it also appears to be significantly less than other locations both inside and outside of Japan.

From one perspective, it appears that is risk of getting harmed by radioactivity in the Tsugaru Channel is similar to other areas in the Pacific Ocean for a variety of reasons.

2. Water Flows. The prevailing currents flow between the Sea of Japan and the Pacific Ocean, far away from the ocean currents that flow from Fukushima Prefecture and points east of the Japanese archipelago. There is no realistic way for radiation to be carried by water to the Tsugaru Channel.

On the east coast of Japan, water flows from the north in Hokkaido southwards towards Fukushima along the Oyashio Current. From there the northeast-flowing Kuroshio Current runs across to Hawaii. Where the currents collide, there is a very rich fishing area. Unfortunately, this is right off the Fukushima coast where the fish contamination is taking place.

3. Radiation Survey. The Marine Biological Laboratory in Woods Hole did a ship-based survey in the Fukushima area. The MEXT data was last compiled on August 2nd.

MEXT is monitoring radiation at around 40 points in the ocean off Fukushima, the most northerly sampling points being A1, A2 and A3. These are nowhere near the Tsugaru Channel. The locations of the measuring points are here with the latest data here.

Currents around Japan are posted here.

4. Dilution. The water-based radiation heading towards northern Hawaii is constantly diluting and decaying. The amount of radiation added to the Pacific Ocean is about the same as was added by the first Pacific bomb tests. The radiation load from the Pacific tests is still decaying, but are longer-lived isotopes, and the radiation load due to Fukushima will drop below the then-current Pacific test levels in about a year.

While some individuals may find different information and come to different conclusions, it appears that in 2013 there will be more radiation from atomic bomb tests 40 years ago, than from the recent Fukushima nuclear crisis, in the Pacific Ocean.

Information gathered with the assistance of Paul Hardy in Tokyo, Japan.

For a visual look at the situation, click on this analyses: