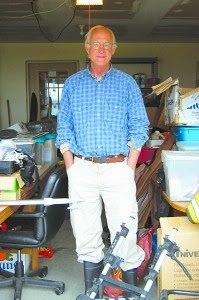 “Far, far away from the most renowned hotbeds of open water swimming, Phil White has created an unlikely mecca of open water swimming and endurance sports in Vermont,” says Steven Munatones. “White has enabled people of all ages, abilities and backgrounds to realize some of their greatest athletic accomplishments. Phil is a dream maker with an endearing smile and a strategic, long-term vision that he has painstakingly executed day by day and mile and mile. His efforts have not only lifted up all the boats in the global open water swimming community, but will also provide future generations of swimmers from around the world a unique challenge and enjoyment of swimming in the Northeast Kingdom.”

His comments were only a tiny sampling of the comments that came in to the publication that serves the state of Vermont and the surrounding area of the Northeast Kingdom when White was chosen as the Newport Daily Express Person of the Year for 2013.

The attorney and founder of Kingdom Games and the Northeast Kingdom Open Water Swimming Association explains why he is transitioning from a stellar legal career to one of an emerging event organizer.

“I believe people should reinvent themselves every so often.”

And he finds the experience in the legal profession helped him for the uncertainty and unexpected in the open water swimming world. “Before court, I visualize all the possible scenarios and outcomes and plans for everything.” Every race director knows that drill and it is exactly what White does before each event of the Kingdom Games.

And for that reason and the overwhelmingly positive response to his events, White, whose best work comes either on the shoreline or in Lake Memphremagog, was selected as the Person of the Year in his local community.